Pathum Nissanka becomes only the fourth Sri Lankan to make a century on Test debut and the first to do so outside Sri Lanka; he puts on 179 for the sixth wicket with Niroshan Dickwella, who narrowly fails to register his first hundred 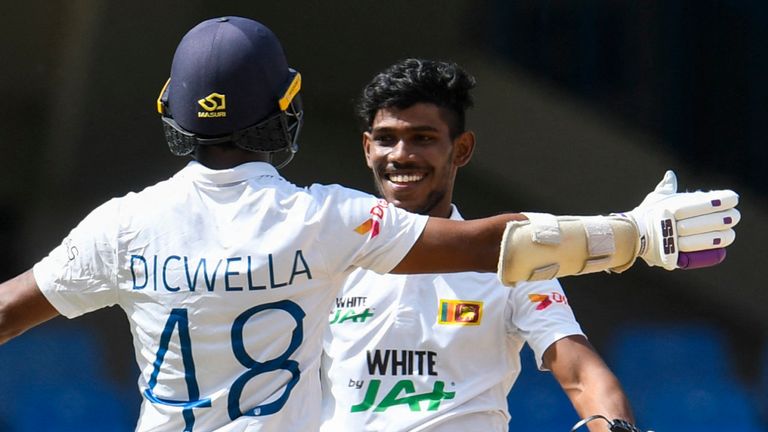 Pathum Nissanka scored a century on debut and Niroshan Dickwella fell four runs short of a maiden century as Sri Lanka took control of the first Test against West Indies on day four in North Sound.

The tourists posted 476 in their second innings to set West Indies a victory target of 375 and by stumps, the hosts were 34-1, still 340 in arrears.

Opener John Campbell (11) was the man to fall, with captain Kraigg Brathwaite was (eight not out) and Nkrumah Bonner (15 not out) at the wicket at the close.

Sri Lanka began the day on 255-4 and quickly lost Dhananjaya de Silva, who added only four to his overnight 46 before being bowled by Alzarri Joseph.

Nissanka and Dickwella then came together to forge a sixth-wicket stand of 179 – Dickwella enjoying lives on 44 and 74.

The wicketkeeper had another piece of luck shortly after passing his previous Test best score of 92 when he was struck on the helmet by Kemar Roach and the ball dropped and spun back, hitting the stumps without removing the bails.

Nissanka reached his 100 with an outside edge wide of slips, from 240 deliveries and with only six fours in a particularly watchful innings which steadily built Sri Lanka’s advantage; in the process, he became the fourth Sri Lankan to make a century on Test debut and the first to do so outside Sri Lanka.

Nissanka was out in the second over after tea, playing an uncharacteristic slog sweep as he tried to lift the run rate, only to be caught at deep backward square by Roach from the bowling of Rahkeem Cornwall.

Dickwella looked sure to go onto his first Test century but on 96 he played a lazy shot to a wide ball from Roach, looking to dab the ball down to third man and dragged the delivery back onto his own stumps.