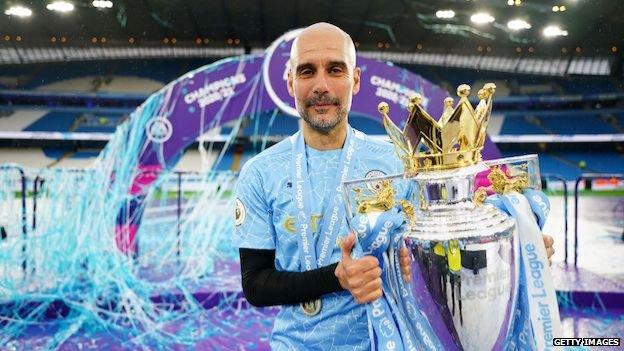 Manchester City boss Pep Guardiola has been voted the League Managers Association's manager of the year.

The Spaniard led City to their third Premier League title in four years.

The club also won this season's Carabao Cup and face Chelsea in the Champions League final on Saturday.

"I am delighted to win the LMA manager of the year award for the second time," said Guardiola, who previously won it in 2017-18.

"It is, for me, such a special trophy to win because it is voted for by my fellow managers. An award like this is only possible though if a manager is surrounded by top professionals.

"My players have been fantastic – their dedication and professionalism never wavered, even in a season that has been the most challenging we have ever faced.

"And my staff are also deserving of the highest praise. I am so lucky to have a team of people who give everything they have every single day to make sure Manchester City are the best we can be.

"This award is dedicated to and shared with them."

Hayes is the first manager from the women's game to be named among the top six contenders for the LMA manager of the year award.

She was crowned FA Women's Super League manager of the year after guiding Chelsea to the league title and the Champions League final.

Steven Gerrard was presented with the LMA special achievement award after his Rangers side went undefeated throughout the Scottish Premiership season.