After carving his drive closer to the ocean than the fairway on the long 16th, Shane Lowry managed to get his ball back to the fairway from the fine sand and scrambled one of the best pars of the week at Kiawah Island. 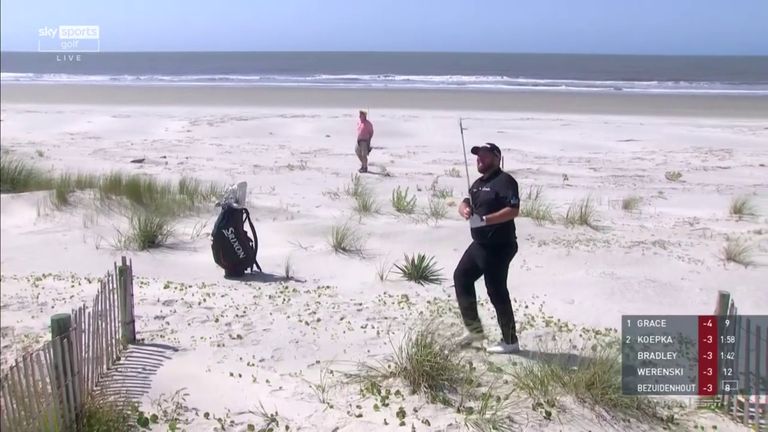 Shane Lowry was forced to play from the beach at Kiawah Island’s Ocean Course after a wayward tee shot at the PGA Championship!

Shane Lowry overcame an unscheduled trip to the beach to make a remarkable par during the second round of the PGA Championship at Kiawah Island.

Lowry had just dropped his first shot of the day after three-putting the 15th green, and he was staring a big number in the face when he carved his drive on the long 16th so far right that his ball appeared to end up closer to the ocean than the fairway.

The Open champion and caddie Bo Martin attracted a number of cameramen as they made their way to the beach and weighed up the options for getting back into play, with a fence a few yards in front of his ball adding another obstacle into the equation.

But Lowry decided the lie was good enough to make a clean strike back towards the fairway, and he pulled it off although he was only able to advance his ball less than 100 yards, and still out of range of the green.

“We got lucky there, could have been a 10,” Lowry was heard to say as he left the beach carrying his own bag, with Bo up ahead providing a target line for the ambitious second shot.

And Lowry managed to take advantage of his good fortune thanks to a cautious approach to the remainder of the hole, laying up to 80 yards, flicking a wedge to 20 feet and the putt for par was never in doubt as he stayed within sight of the lead on level par for the tournament.

Click on the video above to see Lowry’s impromptu trip to the beach on the Ocean Course at Kiawah Island. Watch the PGA Championship through to Sunday’s conclusion, live on Sky Sports Golf.