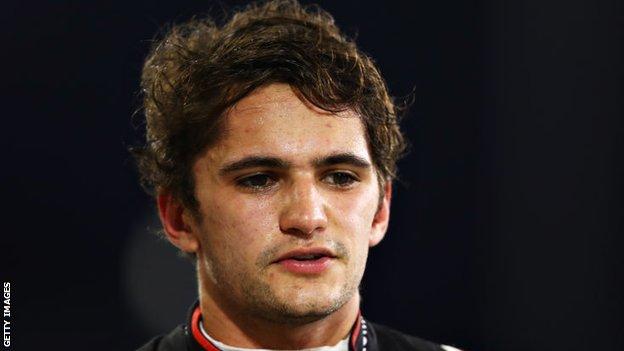 Pietro Fittipaldi joined Haas as a test driver in November 2019

Brazilian Pietro Fittipaldi is to stay on as reserve driver at Haas this year.

The grandson of two-time world champion Emerson Fittipaldi finished 17th in the Sakhir race and 19th in Abu Dhabi.

"Despite the demands of driving with little preparation, he undoubtedly did a solid job for us," team boss Gunther Steiner said.

"He didn't get caught up in the moment, he proved p atient and ultimately he did what he was asked to do – he brought the car home in Bahrain and Abu Dhabi.

"That first-hand race experience will only serve to add value in terms of what he brings to the team in his role this season. We look forward to working with Pietro and having him with us again throughout the year."

Fittipaldi, who will be entering his third season with the US-based team, said: "I'm grateful to Gene [Haas, team owner] and Gunther for the opportunity once again. I've been working with the engineers now for a couple of years and I really feel like it's a big family at Haas.

"It's a great pleasure for me to be able to continue working with the team. With the two races I ran last year, it just helped me gain even more experience, and I'm sure that's going to help me be able to contribute more to the team as a result."

Mick Schumacher, the Formula 2 champion and son of seven-time champion Michael Schumacher will be in one car, with Russian Nikita Mazepin, also an F2 graduate, in the other.

Rugby Union Weekly: Another huge weekend in the Six Nations is unpacked by the boys1 Xtra's Money Moves: Top tips on a positive approach to managing your finances
Source