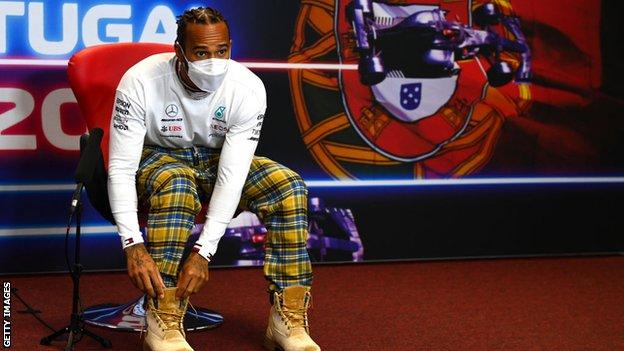 Lewis Hamilton says he intends to remain in Formula 1 for at least another season after this year.

The seven-time champion signed a one-year deal with Mercedes at the start of 2021 but said on Thursday that he "plans" to be in the sport next season.

He said he was "enjoying" his title fight with Red Bull's Max Verstappen and was determined to continue to fight against racism and for diversity.

Hamilton added: "I don't know how long I can stay, though. We will see."

How to follow the Portuguese Grand Prix on the BBC

His revelation about his wish to continue in F1 came in answer to a question about his participation in a tyre development test last week.

"I plan to be here next year and I want to help Pirelli in helping them towards having a better product," he said.

"The drivers have wished for a more [high] performance tyre. So it was important to see where the starting point is and what differences I can help so we have more mechanical grip, less degradation."

Asked to expand on his plans for the future, the 36-year-old said: "I am pretty spontaneous so it could always change. I am enjoying this battle we are having. It is getting more exciting. It has been even more of a challenge.

"I continue to love working with this team, and it is encouraging to see the steps my team are making to becoming more inclusive and more diverse.

"They have announced one of the initiatives we have within our organisation and we still have a lot of work to do as a sport.

"There are still many teams that continue to stay silent and many people who are not particularly being held accountable and there is still a lot of work to do within this sport and I know that being here I have more of a chance of helping to change that than not."

Before the Portuguese Grand Prix, Mercedes have announced a partnership with the Association for Black and Minority Ethnic Engineers in the UK to support people from a minority ethnic background develop careers in engineering.

The team earlier this year set up a joint foundation with Hamilton to promote diversity, while a commission the driver set up last year to look into the lack of ethnic involvement in maths and science subjects will report in the summer.

Hamilton added that he was likely to take part in the boycott of social media platforms many sports are operating this weekend as a means of putting pressure on the companies who run the websites to do more to combat racism and abuse on their platforms.

What to expect this weekend?

Hamilton and Verstappen have won a race apiece out of the two grands prix so far this season and the Briton leads the Dutchman by a single point in the championship.

Hamilton said: "The Red Bulls are still ahead of us on performance but we have done quite a good job over the first two races and there is still a long way ahead of us."

Verstappen added: "Every single weekend you just have to make sure you are on top of the car and get the most out of it because it is so close between us and Mercedes that you really do have to get the best out of it to make a difference."

It is the Red Bull driver's first championship fight in his F1 career and the first time in seven years that the team have been contenders.

Verstappen admitted he was actively trying to lessen the pressure by repeating the mantra: "It is still a very long season."

He explained: "Dreaming doesn't bring you anywhere, and I am pretty realistic all the time and I just want to focus on the race ahead.

"I am not stupid. I know you cannot really make a mistake, especially in a championship that is so close. And I don't want to put any unnecessary pressure on anyone within the team because we know what we have to do.

"There is no point to keep saying it. I just want to focus on this weekend. I prefer to remain quite silent. I don't need to hype anything up."