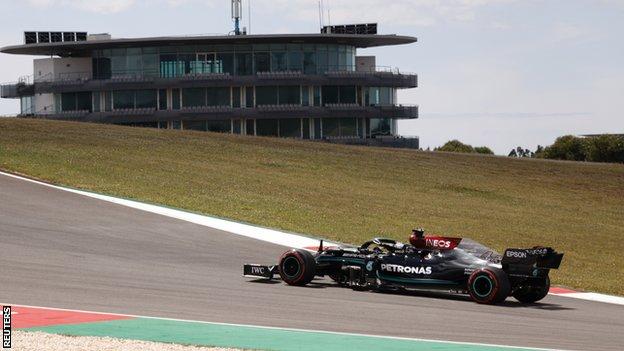 Listen to third practice and qualifying on the BBC Sport website from 12:00 BST on Saturday

Lewis Hamilton headed Max Verstappen by 0.143 seconds to lead the way in second practice at the Portuguese Grand Prix.

The second Mercedes of Valtteri Bottas was third quickest, ahead of Ferrari's Carlos Sainz and the Alpines of Fernando Alonso and Esteban Ocon.

It is the first time this season that Hamilton has topped a practice session.

And the day suggested there will be another close fight between Mercedes and Red Bull at the front.

Bottas was 0.334secs behind Hamilton, as less than 0.1secs separated the Finn, Sainz, Alonso and Ocon.

Practice is not always an accurate reflection of true pace, but on the face of it the undulating Portimao track on the Algarve was Alpine's most competitive showing of the year so far.

The Anglo-French team, formerly known as Renault, have been at the back of the midfield in the first two races this season, but have brought some new aerodynamic parts to this race – including a new front wing – and appear to have made a step forward.

Alonso, returning to F1 this year after two years away, had a difficult time in the last race at Imola, admitting after qualifying that he was "not fast" and vowing to improve in Portugal.

And on first evidence he appears to have done so, leading the way for Alpine, albeit just 0.015secs quicker than Ocon, who improved on his second flying lap to move closer to the two-time champion after being 0.2secs off on his first run.

Ferrari's Charles Leclerc was seventh fastest, ahead of McLaren's Daniel Ricciardo – another driver who has changed teams who struggled at Imola. Aston Martin's Lance Stroll and Red Bull's Sergio Perez completed the top 10.

McLaren's Lando Norris was 12th quickest, while Sebastian Vettel continues to find his feet in the second Aston Martin and was down in 15th place.

The race-simulation runs at the end of the session suggested that the favoured race-start tyre may be the medium – as it has been at both races so far this year.

So the leading teams will probably try to use that tyre to set their times in second qualifying on Saturday to ensure it can be their compound for the start of the race.