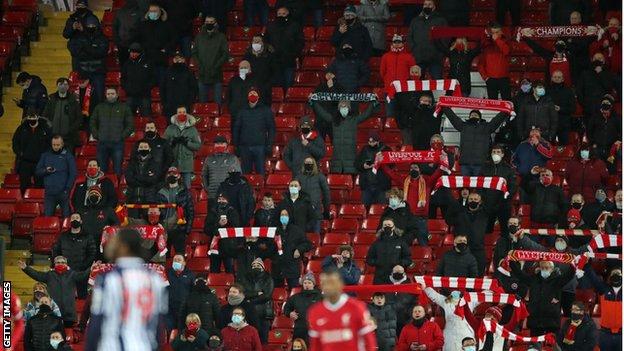 Up to 2,000 fans were allowed at a number of Premier League matches in December

Away fans could be allowed back at Premier League matches for the final two rounds of the season, following a change in stance from the government.

Only home fans have been permitted to attend top-flight games since the start of the Covid-19 pandemic.

Up to 500 away fans could be allowed to watch games in May's final two matches.

The Premier League has also moved round 37 fixtures back to midweek, 18-19 May, so each club has one home game with fans before the end of the season.

From 17 May, outdoor sports venues are due to be allowed up to 10,000 fans or 25% capacity, whichever figure is lower.

An email from Premier League chief executive Richard Masters to clubs on Thursday revealed that the government is set to allow up to 5% of the capacity to be made up of away fans.

Therefore, clubs have been asked to respond by the close of play on Friday on whether they are in favour of welcoming up to 500 away fans and whether they think it would be possible, given they would need local authority approval.

BBC Sport has been told some clubs are opposed to the move because of logistical complexities and wanting to give the maximum number of tickets to their fans, who have been unable to attend matches for several months.