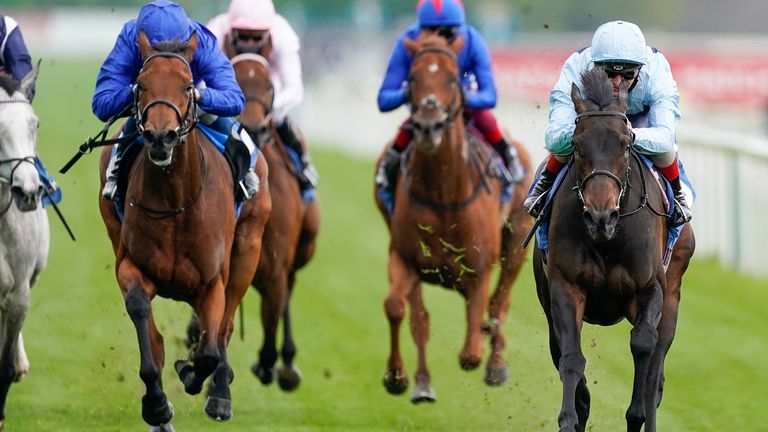 Primo Bacio booked her Royal Ascot ticket as she continued her improvement in landing the Listed Oaks Farm Stables Fillies’ Stakes at York.

The Ed Walker-trained three-year-old was stepping up in trip to a mile having previously been campaigned over six and seven furlongs, with her seasonal debut resulting in a luckless fourth-placed finish in the Fred Darling Stakes at Newbury in April.

The extra distance of a race better known as the Michael Seely Memorial seemed to be entirely to the filly’s liking, as she showed an impressive turn of foot to accelerate past the majority of the field with a furlong left to travel, eventually crossing the line three lengths ahead of Creative Flair to prevail at 14-1.

Walker said: “She just had to relax to get the trip – that was going to be the key with her.

“She was a bit keen an a bit fresh at Newbury and got stopped dead in her tracks. Who knows how close she’d have got? She got properly stopped at a key point of a race.

“It was discussed afterwards whether we should supplement her for the Guineas, but it was never really an option in my mind.

“She improved so much through the winter and was working the house down, hence we ran a 79-rated filly in a Group Three.

“She’s got a great turn of foot and picked up very well today.

“The Coronation Stakes at Royal Ascot will be next.”

Ridden by Andrea Atzeni, Primo Bacio is owned by David Ward, the same owner that joined Walker in enjoying the Group Two success of Starman in the Duke of York Stakes on the Knavesmire on Tuesday.

The latter is bound for the Diamond Jubilee at the Royal meeting.

“There aren’t many of them, but it’s been a good week,” Walker added.

“It’s very exciting going to Royal Ascot with the two of them. It’s great for the Wards, who are big supporters of ours.”

Richard Hannon’s Snow Lantern, the 10-11 favourite, took a keen hold throughout and could only finish third as she struggled to find the late pace to pursue the leading duo.

Hannon said: “She was disappointing. She was very keen. We’ll get her home and see how she is.”