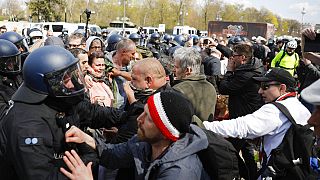 German legislators have passed a proposal by Chancellor Angela Merkel’s government to radically change COVID-19 restrictions in the country as police rounded up demonstrators in Berlin.

More than 150 people were arrested after police clashed with demonstrators near the Reichstag ahead of the vote, which has sparked controversy in a country already exhausted by 12 months of changing social distancing rules.

If passed by Germany’s upper house later this week, the changes to the Infection Protection Act will see automatic, uniform restrictions imposed in areas where coronavirus is spreading too fast.

This would include an immediately-imposed 10pm to 5am curfew, and the closure of leisure and sports facilities and shops, in areas where 100 weekly new cases per 100,000 residents are reported. Schools would also have to switch to distance learning at a higher rate of 165.

The proposal aims to harmonise the patchwork of different measures taken by Germany’s 16 states for much of the pandemic. But some German commentators have decried it as a move to centralise power to Berlin.

Meanwhile, the official Twitter account of Berlin Police reported on Wednesday afternoon that as of 3:50pm local time, some 152 people had been arrested in connection with the protests.

Tweet reads: “As of 3:50pm, a total of 152 people were arrested. Including violations of the COVID-19 Infection Protection Act & criminal offenses such as physical attacks on emergency services, resistance against law enforcement officers and attempted release of prisoners”

The lower house of parliament voted 342-250 for the plan on Wednesday, with 64 abstentions. The upper house, where state governments are represented, is due to consider the legislation on Thursday. If approved by both, it would immediately apply until the end of June.

Germany’s nationwide coronavirus infection rate stood at 160 new cases per 100,000 residents on Wednesday, though there were wide regional variations. 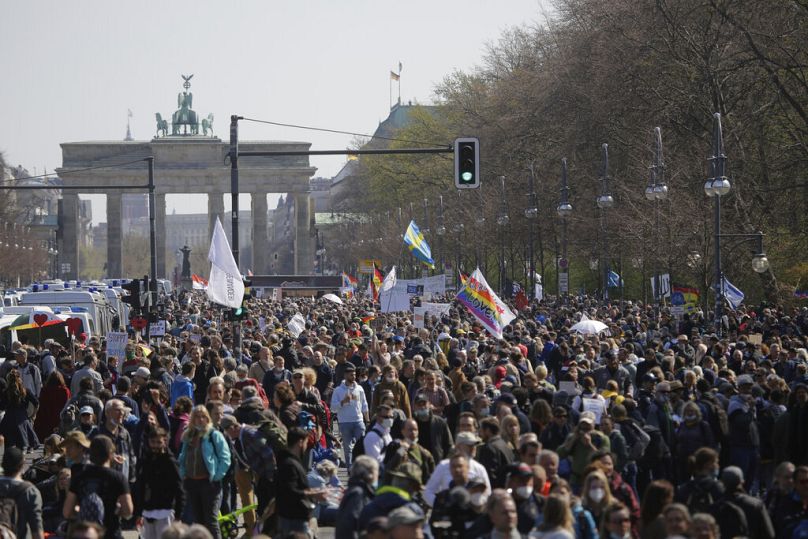 Demonstrators at a rally near the Brandenburg Gate, Berlin on WednesdayMarkus Schreiber/AP

“As hard as it is, as sick of it as we are, reducing contacts helps,” health minister Jens Spahn told the assembled lawmakers before the vote. “We are again seeing 5,000 COVID-19 intensive care patients and rising, with the age of the patients sinking.

Police said up to 8,000 people had assembled nearby earlier in the day, with many of them not wearing masks, and broke up a gathering near the Brandenburg Gate as they said organisers had failed to ensure the participants complied with restrictions.

“There are some people out there today, on the streets of this city, who say it isn’t serious and there’s almost nothing going on,” Vice Chancellor Olaf Scholz said in parliament. “Yes, something is going on: 80,000 people in this country have died, and you can’t talk past or overlook that.

“Because that’s the case, and because the situation is still serious, something must be done beyond what we have done so far. What we need now is clarity and consistency for what happens when the infection rates rise too much.” 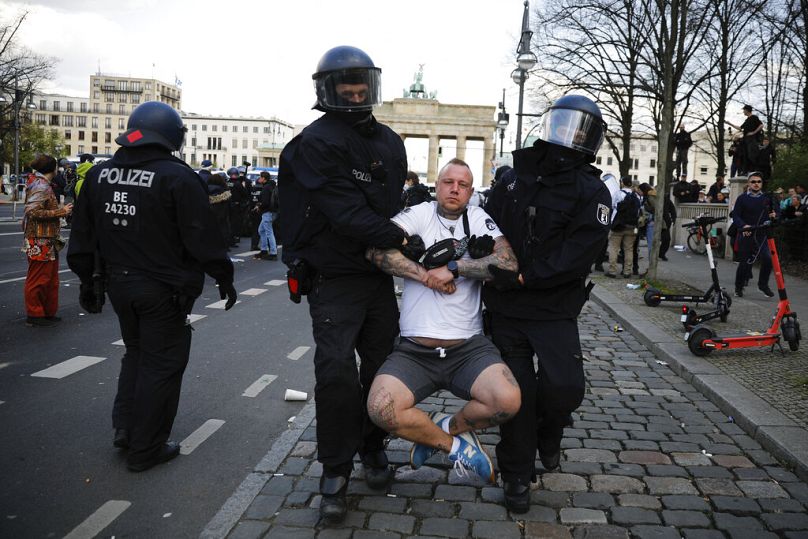 Opposition lawmakers advanced a variety of arguments against the bill. Alexander Gauland of the far-right Alternative for Germany, which opposes lockdown measures in general, called it an “attack on rights of freedom, federalism and common sense.”

The Greens objected on the opposite grounds. “This emergency brake remains too half-hearted, too ineffective, too inconsistent and too disproportionate,” Bundestag member Maria Klein-Schmeink said.