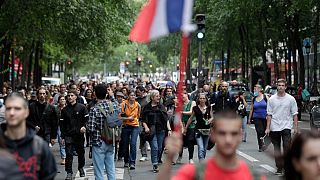 Protestors marched through the centre of Paris on Wednesday to rally against the new measures.

Thousands of people have demonstrated in France against plans to restrict restaurants and cultural spaces to those that have been vaccinated or have recently tested negative for COVID-19.

Police used tear gas to disperse the demonstrators in several French cities, including the capital city, Paris, and Lyon.

The measures, announced on Monday, were part of an attempt by President Emmanuel Macron to fight a new wave of infections and potential hospitalisations. “The more we vaccinate, the less space we leave this virus to circulate,” he said.

Doctors and scientists predict more hospital admissions when the increase in delta variant infections hits vulnerable populations, as has happened in some other countries.

But critics say the measures trample on freedoms and discriminate against those who do not want to be vaccinated. French citizens marched in a number of cities on Wednesday to denounce the measures as a “dictatorship”.

In Paris, a few hundred demonstrators took part in a rally at Place de la République, before marching through the city chanting “liberté” (“freedom”), while some badges saying “No to the health pass”.

Many voiced their anger at new measures that will force healthcare workers and other professions to be vaccinated.

Police in Lyon fired tear gas grenades to try and contain a large demonstration in the city centre. At least 1,400 mostly young people had gathered to protests against Macron’s announcement, police estimated.

According to the prefecture, demonstrators threw projectiles at the police before the authorities responded with tear gas.

Hundreds of people also gathered in Montpellier, Marseille, Perpignan, and Rouen to protest against the restrictions.

In Toulouse, a small rally was held by several “Yellow Vests” groups on Wednesday morning, while in Annecy, a small group of people forced their way into the local council offices without causing any damage.

Between 150 and 200 people remained in the courtyard of the building for over an hour, the Haute-Savoie prefecture said.

France’s Interior Minister Gérald Darmanin said on Twitter that he condemned the incident in Annecy “in the strongest terms”.

Wednesday’s protests took place as France celebrated on Bastille Day, to mark the turning point in the French Revolution in 1789.

Last week a joint communique by the French national academies of medicine and pharmacy described the “obligation” to get vaccinated as a civic duty.

“If individual freedom must be respected, it is however limited when there is danger to others. Faced with COVID-19, vaccination is not only a civic gesture, it is an ethical imperative,” it said.