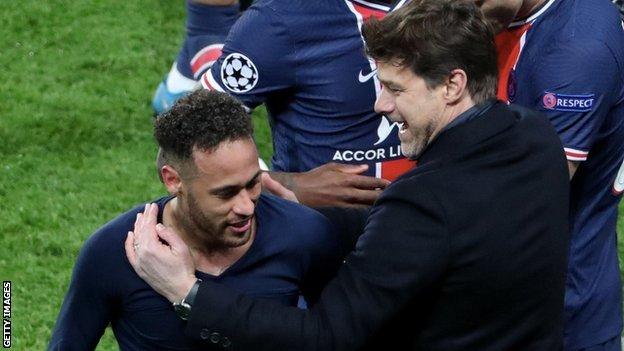 As Mauricio Pochettino celebrated with his Paris St-Germain players after their Champions League victory over Bayern Munich, his opposite number Hansi Flick cut a frustrated figure.

A result that feels like a launchpad for one manager's tenure has all the hallmarks of an ending for the other.

Just three months on from taking the PSG job, Pochettino – whose side have faltered in Ligue 1 – is making his mark on the European stage, with Wednesday's end result an especially sweet one against the side that beat the French club in last season's final.

In contrast, the final in Lisbon eight months ago now feels like the peak for Flick's Bayern, with their exit from this season's competition and disagreements between club hierarchy and coach likely to spell the end for the 56-year-old.

BBC Sport takes in the reaction to Wednesday's game and looks at the ramifications of a big result for two huge clubs.

PSG reach last four with away-goals winBest action and reaction from PSG v Bayern Munich in the Champions LeagueHansi Flick: The Bayern Munich boss who could walk away 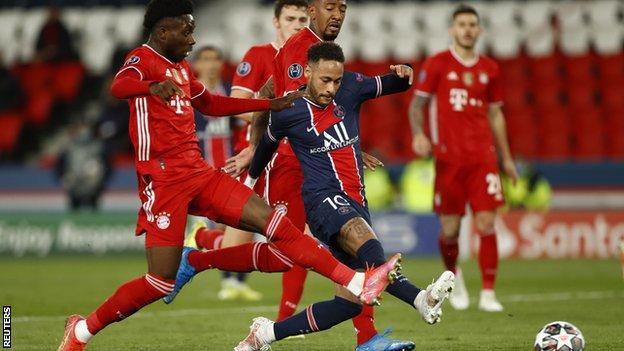 "It was a really tough match and I'm really happy because the players deserve the credit and we're so happy for them, the club and the president," Pochettino told BT Sport after the away-goals win, speaking to a harmony that now exists at PSG.

The club's progress over the past two years is there for all to see.

Having reached the semi-finals of the Champions League only once in 11 previous campaigns, they have now made the last four twice in succession.

They have also exorcised two of the demons from past failures in this season's Champions League, beating Barcelona, who came back from 4-0 down to knock them out in the round of 16 in 2017, and now Bayern.

They were beaten by a better side eight months ago, but now look a far more savvy outfit, marrying the quick, skilful attacking threat of Kylian Mbappe, Neymar and Angel di Maria with a resolve and defensive discipline.

They conceded the lion's share of possession and trailed 45-16 to Bayern on shots across both legs but while they may have ridden their luck somewhat in Germany, they managed the return leg superbly in Paris after falling behind.

And had they replicated the attacking ruthlessness on display at the Allianz Arena, they would have been out of sight by half-time of the second game.

"After three months working here we're enjoying the moment and if you qualify for the semi-finals then this is an amaz ing moment for us," continued Pochettino.

"When you're on the touchline, close to the pitch, it's not easy to enjoy it but I try to be calm on the outside, but just inside you are dealing with the stress – that's the adrenaline of it that you love to feel.

"It was an amazing game. The quality is there and they worked so hard. I'm so happy because our job is to get all this talent to work as a team."

Key to this is Neymar, a player who has often felt like a supremely talented individual as opposed to a world-class team player.

He has endured injury and illness issues this season, limiting him to just 22 appearances, in which he has still managed 13 goals and eight assists.

Wednesday, though, showcased a player perfectly integrated into an XI, with the Brazilian producing a superb display that would have seen him walk away with more than one goal and possibly a few assists to his name but for the woodwork and the brilliance of Bayern keeper Manuel Neuer.

"We're a real team and we have to congratulate everyone," Neymar said afterwards. "The most important thing is that we qualified. Now we're in the semis and we're aiming even higher."

'It is likely Flick will leave for the national job' 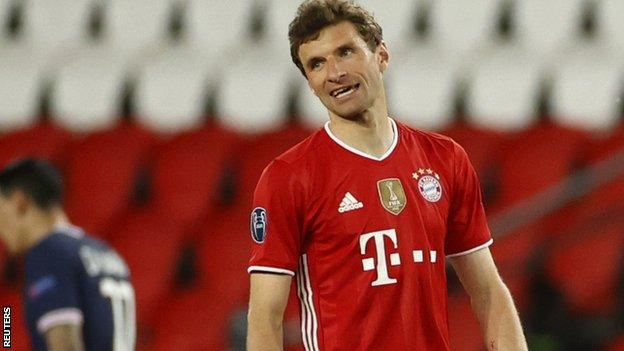 Flick was magnanimous and measured in his reaction to Wednesday's result.

"Normally, my team has so much quality in the final third, but today they were lacking that final punch. We have to accept that, even though we would have liked a different outcome," he said.

"Given the first leg, with all our chances and the ones we gave away; without the third goal, we would be through.

"You saw how dangerous they are in attack. I have to pay huge compliments to my team, even though Paris progressed. As a fair loser, I would like to congratulate them."

Significant injuries, none more so than the loss of prolific striker Robert Lewandowski for both legs, did not help their cause against PSG.

But as German football writer Raphael Honigstein told BBC Radio 5 Live, they have also suffered because of an inability to refresh the squad last summer.

"They had nothing on the bench tonight," he said. "They had nobody to bring on after 60-70 minutes. Bayern lacked that bit of spark in the final third.

"Because of Covid they were conservative in the transfer window. Their core players have played a lot of games and once you are missing Serge Gnabry and Lewandowski they ran out of steam."

All attention now turns to the coach, who has been engaged in a much-publicised difference of opinion with Bayern sporting director Hasan Salihamidzic over how much say his role entitles him to in matters such as transfers.

"The question is what will Hansi Flick say?" added Honigstein. "They are waiting for him to give an answer. There is a big expectation that he will now show his hand and say whether he is going to stay or not.

"A win would have strengthened his hand at the club. Now they are out I think it is more likely he will leave to take the national job.

"The decision will be forced on Bayern in the next week or so. The expectation in Germany is that Leipzig coach Julian Nagelsmann will be the next Bayern coach."