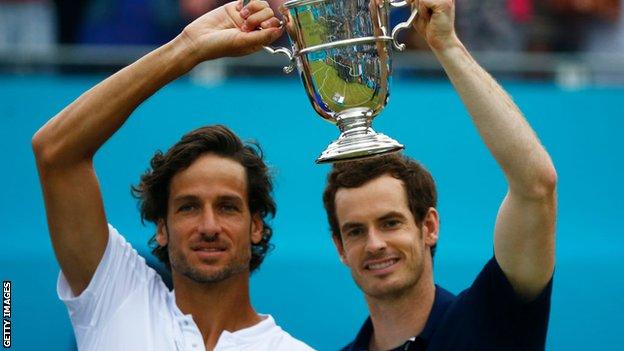 Britain's Andy Murray says he is "not offending anyone" by continuing to play despite his injury problems and has extra motivation from seeing Swiss great Roger Federer still competing.

Murray, 34, returns to singles action for the first time in three months at Queen's this week after a groin injury.

The Scot says he is "not perfect" but is happy with the way he is practising.

"The reason why I'm still doing it is because I enjoy it and I don't see any problem with that," he told BBC Sport.

"I'm not offending anyone and it's not hurting anyone. I like it."

Former world number one Murray has not played competitively on the singles court since losing to Russia's Andrey Rublev at the Rotterdam Open in March.

In May, he played alongside fellow Briton Liam Broady in the Italian Open doubles, where they lost in the second round.

Murray had travelled to Rome for practice sessions with some of the world's leading players, including 19-time Grand Slam champion Novak Djokovic, but entered the doubles with Broady as a late alternate.

After deciding to focus on practising on the grass before Queen's, he will return to singles action when he plays France's Benoit Paire at the Cinch Championships on Tuesday.

"I know I'm not playing at a level that I was playing a few years ago," the three-time Grand Slam champion said.

"It's been extremely frustrating for me not to have any consistency, in terms of competitions, to really judge and see exactly where my game is at.

"But there has been, for me anyway, enough evidence and practices that I've had with top players to suggest I can still compete with them."

'I took a lot from watching Roger fired up'

Murray is also planning to return to Grand Slam action at Wimbledon, which starts on 28 June, provided he does not encounter any further injury problems.

"I feel all right, but not perfect. I've been happy with the way I've been playing in practice and I've been hitting the ball well," said Murray, who won Wimbledon in 2013 and 2016.

"But I need to hope my body holds up during this period and that's a big 'if' for me. I can't say with certainty that I'm going to be fine because that hasn't been the case over the last six to nine months."

Murray watched 39-year-old Federer return to Grand Slam action for the first time in 16 months at the French Open earlier this month and says he was inspired by what he saw.

Murray was particularly impressed by seeing Federer, a 20-time major champion, digging deep to win a third-round match against Germany's Dominik Koepfer behind closed doors late into the Paris night.

"You wonder what separates the top athletes and the really great athletes that have been doing it for a long time," Murray said.

"To me, that was just a perfect example of someone who loves what he does, he loves the game, playing in front of no crowd.

"Just seeing how he was still motivated for me was special. Watching that match I was like 'this is brilliant' and I took a lot from it."

'Nobody came out of Osaka situation well'

Murray also passed on his well-wishes to Japanese world number two Naomi Osaka, who pulled out of the French Open after revealing she had been suffering from depression.

The Scot added he thought the situation was not "handled well" and believes the communication between all parties "could have been better".

"I believe that tennis will work with her and her team to find solutions to whatever it is that's triggering her anxiety or depression.

"I wish it'd been handled differently because I don't think anybody came out of it well.

"I can't believe her team, if press was what was making her feel depressed or anxious, hadn't communicated that to the Grand Slams or to the WTA to try to find a solution around it. And I don't think it was a good look for the tours in terms of wanting to default her.

"As soon as she said on social media that she'd been dealing with depression, the stance from the Slams and tennis changed and was quite different.

"But I do feel if I went to the Grand Slams [and said] that this is what I'm dealing with, and spoke to them directly, they would try to help."

Live scores, results and order of playAlerts: Get tennis news sent to your phoneCatch Her If You Can: A game of cat and mouse with a con artist who had nearly everyone fooledKrept and Konan: Exploring Englishness in creating the Euro 2020 anthem
Source