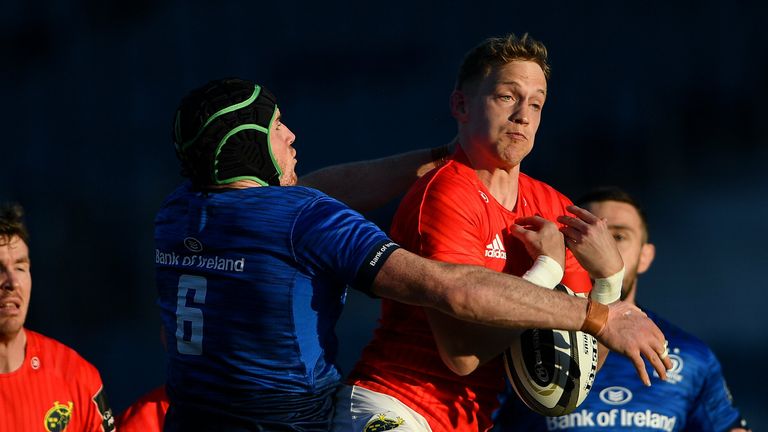 Mike Haley of Munster is tackled by Ryan Baird of Leinster

Glasgow suffered a heavy defeat to Benetton in their opening match of the Rainbow Cup, beaten 46-19 by a team who failed to win a single match in the regular Guinness PRO14 season.

Conor Murray’s try double drove Munster to their first win over Leinster since December 2018 as they began the Guinness PRO14 Rainbow Cup with a stellar 27-3 success at the RDS.

There was plenty of niggle in an error-strewn first half which ended 10-3 in Munster’s favour. Joey Carbery tagged a penalty onto Murray’s fourth-minute score, while replacement David Hawkshaw kicked Leinster’s points.

Much closer to full-strength than their arch-rivals, Munster came through Stephen Archer’s sin-binning unscathed. There was no way back for Leinster after another Carbery penalty, Murray’s second try and a 71st-minute penalty try.

Ospreys began their Rainbow Cup campaign with a bonus-point 36-14 victory over the Cardiff Blues at the Liberty Stadium.

Two tries from Ifan Phillips and further scores from Keiran Williams, Matthew Aubrey, Sam Cross and Sam Parry along with six points from the boot of Josh Thomas got the Ospreys off to a winning start.

The Italians built on a pair of encouraging displays in the European Challenge Cup by totally dominating the first half as a Monty Ioane try and two from Niccolo Cannone steered them to a 21-0 lead at the interval.

Glasgow were wasteful and had a Cole Forbes try disallowed around the hour mark following a successful captain’s challenge – one of the new laws introduced for this competition.

Toa Halafihi and Michele Lamaro went over before Forbes finally got the visitors on the board after running the length of the pitch following a goal-line dropout.

Gianmarco Lucchesi got the home side’s sixth try of the afternoon before Ian Keatley and Nick Grigg crossed for consolations.