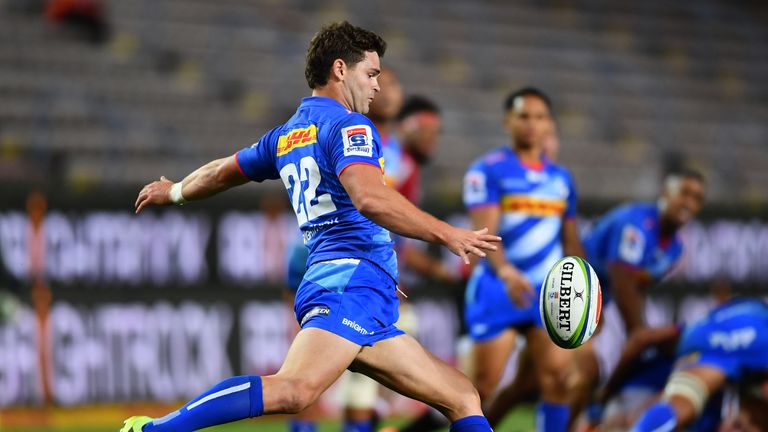 Tim Swiel in action for the Stormers

The Stormers edged the Lions in South Africa while Cardiff Blues saw off Scarlets and Benetton remain unbeaten after their win against Zebre.

Tim Swiel held his nerve to score the decisive penalty as the Stormers staged a dramatic late fightback to beat the Lions 39-37 at Ellis Park.

The Lions had looked set to clinch victory in their Rainbow Cup clash after edging into a 37-29 lead with less than five minutes to play.

But centre Dan Du Plessis scored a try to round off a brilliant move which began deep in his side’s own half, with Swiel converting to make it a one-point game.

The Stormers, who trailed 22-15 at half-time, pushed forward once more and were rewarded with the decisive penalty, which Swiel converted from mid-range.

Swiel’s heroics handed the Stormers their first win in the competition after two defeats, while the Lions have now lost three games in a row.

Jarrod Evans kicked a late penalty to secure Cardiff Blues a third victory this season over the Scarlets, winning 29-28 in Llanelli.

After achieving a double success in the Guinness PRO14, Blues recorded a nail-biting victory to keep alive their hopes of progressing in the Rainbow Cup with a second defeat for Scarlets severely denting their hopes.

Wales coach Wayne Pivac was present and he would have been impressed by the performances of Blues half-backs Tomos Williams and Evans.

Benetton enhanced their status as the Guinness PRO14 Rainbow Cup’s unlikely pace-setters with a 34-27 victory over Zebre in Treviso.

Having not won a single game during the regular PRO14 season, Benetton are now the only team who can boast a 100 per cent winning record following Munster’s defeat to Connacht on Friday.

This bonus-point win, which came courtesy of tries from Toa Halafihi, Monty Ioane, Gianmarco Lucchesi and Edoardo Padovani, sends Kieran Crowley’s men four points clear at the top of the table, with the eventual victors set to meet
their South African counterparts in a north-versus-south final on June 19.

Hanging on to top spot may be a tough ask for Benetton, who host Connacht next before travelling to face the Ospreys in their final fixture, but their back-to-back victories over Zebre and a shock opening win against Glasgow Warriors have given them a platform they could only have dreamed of at the start of the tournament.

The Bulls made it three wins from three in the Guinness Pro14 Rainbow Cup SA with a thumping 43-9 victory over the Sharks.

It was a tight contest in the first half, with Bulls leading 12-9 thanks to four penalties from Morne Steyn compared to three from Curwin Bosch.

The points glut for the home side at Loftus Versfeld began with a try from Lizo Gqoboka in the 52nd minute, which was converted by Steyn, who then added another penalty.

Stravino Jacobs scored the Bulls’ second try in the 66th minute, also converted by Steyn, and a final flourish earned them a bonus point.

Schalk Erasmus crossed in the 76th minute and replacement Chris Smith did the same three minutes later, with Smith converting both tries.