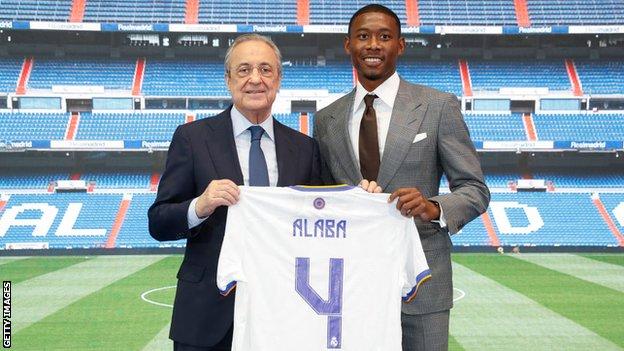 Real Madrid defender David Alaba says he does not intend to "replace" former captain Sergio Ramos after being given the Spaniard's number four shirt.

Austria international Alaba, 29, signed on a free transfer after his departure from Bayern Munich in May.

Ramos, who spent 16 years in Madrid, joined Paris St-Germain after the 35-year-old's contract expired in June.

"We all know Ramos was here for a long time and wore this number, becoming the leader of this team," Alaba said.

"But the truth is that yesterday I spoke to the club and they told me that right now it's the only available squad number. I didn't want to start asking other players if they wanted to swap.

"I'm honoured to wear the number four, it's a source of great pride and motivation for me and I want to do it justice.

"But I'm not here to compare myself to other players or replace them, I'm here to be David Alaba."

Alaba, who has signed a five-year deal, won 10 Bundesliga titles, two Champions Leagues and six German Cups after coming through the youth system at Bayern Munich.

The versatile Austrian will be managed by Carlo Ancelotti at the Santiago Bernabeu, after the former Everton boss replaced Zinedine Zidane in June.