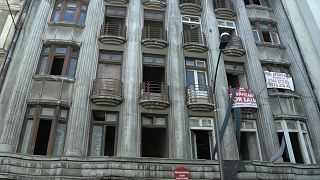 Bucharest is the EU capital that is most at risk from earthquakes, many seismologists believe. And with hundreds of vulnerable old buildings suffering from decades of neglect, many residents of the Romanian capital are living in fear for their lives.

Violeta and Asaad Hussein have been trying to get the structure of the building reinforced for 21 years. Works have been started but left unfinished. The bad experiences are building up.

“Once there was an earthquake a bit bigger than the others,” says Violeta. “It was during the night. The owners of the apartments on the 5th and 6th floors of this building – and those from the buildings around – we all rushed downstairs in our nightgowns and gathered in the street below. This really… it really happened to us.”

Constructed in 1934, the building is among the most vulnerable in Bucharest. Lying on a faultline, the city is considered by seismic experts to be the EU capital most at risk from earthquakes.. Should there be an earthquake of magnitude 6.0 or higher, these apartments would almost certainly collapse, experts have assessed.

Some are abandoned; others are inhabited. All are extremely dangerous.

From that list, the one in 1977 still brings shivers in Bucharest. It had a magnitude of 7,2. Around 1,600 people died. Some 33,000 buildings were destroyed or damaged. Since then, very little complete structural consolidation work has been done.

“More than 8,000 people live in the 317 buildings that have been identified as high-risk,” says Bogdan. “So if there was an earthquake similar to that of March 4th 1977, the number of victims could be anything from 8,000 upwards.”

As time goes on, concerned owners and tenants feel increasingly unsafe – and powerless. Consolidation costs could run to billions of euros that one of Europe’s poorest nations can ill-afford. Lack of resources. bureaucratic delays, political infighting, allegations of corruption and complex legal issues keep the situation stalled.

“For now we don’t have the technical solutions needed to solve the problem,” says Bogdan. “We don’t have the required legal solutions either, nor the money nor a general willingness to push saving these buildings and the protection of their owners and tenants as a matter of public interest.”

The Ministry for Development declined our request to discuss these claims.

At Bucharest Town Hall, Edmond Niculusca, the newly appointed Director of high-risk buildings’ administration, told us they are actively discussing solutions with the government, the European Union and international banks. He says they’ve just begun on 15 new consolidation projects.

“For the first time we’ve started to discuss with the National Heritage Institute, with the Technical University, with the Order of the Architects, with the experts and professionals who we can work together with on a strategy,” he says.

With no effective short-term solutions in sight, anxious eyes turn to the National Seismic Institute.

Here experts monitor seismic activity with real-time data from eight local observatories around the country. Nobody can predict when the next big earthquake will hit Bucharest, the director Constantin Ionescu tells us.

We can know exactly what the effects are on particular buildings.

“We have special software that evaluates a given earthquake,” he explains. “Each seismic station registers the tremor movement at that point; from this we can estimate how strongly the earthquake was felt in a city. This rate of earth acceleration is transmitted to the base of the buildings. Through these earthquake parameters, we can know exactly what the effects are on particular buildings.”

Preparing for the worst

Aware of Bucharest’s vulnerability, firefighters, first-aid rescuers and volunteers train to be ready. An NGO trains 20 dogs to find survivors under the rubble. They dogs were in action after a recent earthquake in Albania and are on hand – should they be needed.

“The worry that we have is whether our volunteers will themselves be under the rubble,” says Vlad Popescu, dog trainer at Clubul Caini Utilitari. “That is the main thing that worries us. Otherwise it will be another day in the field for them. For us, as trainers, volunteers, handlers, it would be a good challenge to keep ourselves together and to be able to intervene. Because most of the things that we see will be close to our hearts and we would be emotionally charged. But hopefully we would be able to put in practice the training that we have done for all these years.”

Another building in Bucharest shows that the worst-case scenario is avoidable and that preventive solutions do exist. Heavily damaged during the 1977 earthquake, it has been completely reinforced with steel-embedded concrete – outside and inside the structure.

We asked the consolidation company how it was done. We asked to see the papers. And after that, we decided to buy.

The owners each paid in proportion to the size of their apartment, with the bill coming to around €500 per square metre. Cristina Iordache bought one of them, once the consolidation works had been completed.

“Before buying the apartment, we did some tests,” she says. “We called a construction engineer that came and saw everything. We asked the consolidation company how it was done. We asked to see the papers. And after that, we decided to buy. And yes, we feel safe. Since we have been living here, we have only experienced one earthquake. And it did not feel that bad.”

It’s an example that hopefully will spread. Some experts estimate that more than a third of Romania’s 8.5 million housing units are in a state of neglect.