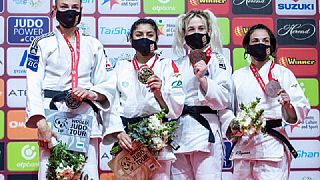 Grand Slam judo is back in Tel Aviv – and on the opening day, it was the sport’s rising stars who made the biggest impact.

This match was just about feeling

A throw for ippon gave her victory and our woman of the day award. Event co-host Sylvan Adams presented her with her gold.

“This match was just about feeling,” she said afterwards. “It’s about feeling good. I don’t remember what I did, or when I did it. I just feel it and now it’s finished and I won by Ippon!”

Azerbaijan’s Davud Mammadsoy was our man of the day. His explosive -60kg final against Georgia’s Temur Nozadze culminated in a spectacular Ouchi Gari throw for victory.

Great Britain’s Chelsie Giles had the day of her life. After spectacularly defeating Olympic Champion Majlinda Kelmendi in the qualifiers, she proceeded to take out home favourite Gili Cohen of Israel in the final with a fantastic San Gaku.

Everybody understands what they have to do and what they can’t do. So I’m really happy with this organisation

“Everybody wants to go out and get back to normality,” said Gaitero Martin afterwards. “Right now it’s not possible. In that sense, Tel Aviv is doing great. The organisation is great, the protocols are great. It makes sense. Everybody understands what they have to do and what they can’t do. So I’m really happy with this organisation.”

Alex Gilady, IOC member and Vice-Chair for the Coordination Commission of the Tokyo Olympics, awarded Nelson Levy her medal.

Our move of the day came from India’s Saini, with a massive O Goshi right out the gate for an emphatic Ippon.