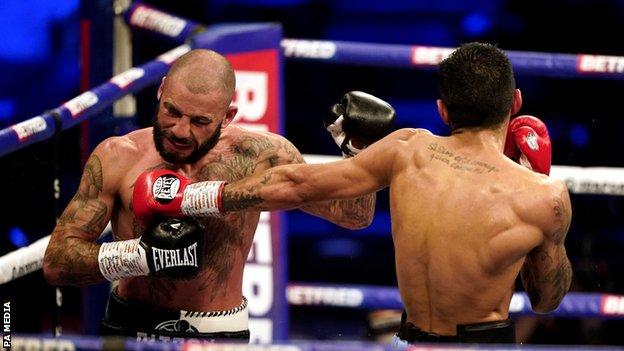 Britain's Lewis Ritson had his hopes of a world title shot ended by Argentine Jeremias Ponce in a 10th-round stoppage in Newcastle.

Ritson was knocked to the canvas on three occasions in the 10th round.

Controversially, referee Steve Gray ignored the towel being thrown in by Ritson's corner after the first knockdown.

The fight appeared to be over when a body shot saw Ritson fall to his knees, promoting his corner to act after he was forced back on to the ropes with another barrage.

However, in a bizarre scene, rather than acknowledge the towel being thrown in, Gray allowed the fight to continue before picking it up and throwing it out of the ring.

Ritson went down for a second time seconds later, and when he did so for a third time in quick succession the fight was stopped with one minute 34 seconds of the 10th round remaining.