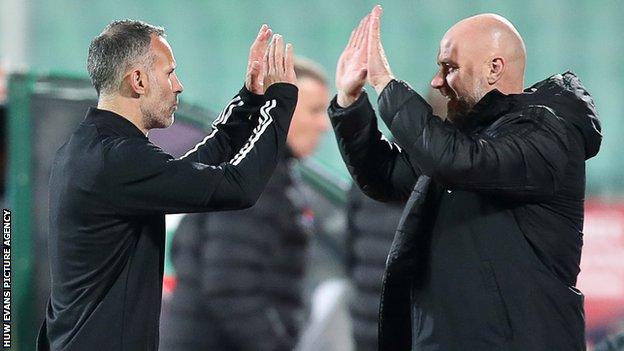 Robert Page will take charge of Wales at Euro 2020 this summer after national manager Ryan Giggs was charged on Friday with assaulting two women.

Page has deputised for Giggs in the last two international windows.

The Football Association of Wales (FAW) said: "The FAW can confirm that Robert Page will assume the role of manager for this summer's Euro 2020 tournament."

The governing body added: "An FAW board meeting will be convened to discuss these developments and its impact on the Association and the national team.

"The FAW will not be making any further comment at this current time."

Giggs has been charged with causing actual bodily harm to a woman in her 30s and common assault of a woman in her 20s at an address in Salford on 1 November, while the 47-year-old is also charged with coercive or controlling behaviour between December 2017 and November 2020.

After he was charged Giggs said in a statement: "I have full respect for the due process of law and understand the seriousness of the allegations. I will plead not guilty in court and look forward to clearing my name.

"I would like to wish Robert Page, the coaching staff, the players and the supporters every success at the Euros this summer."

Giggs, capped 64 times by Wales before retiring in 2007, became Wales boss in January 2018, helping them qualify for the delayed Euro 2020 finals.

Earlier in April, FAW president Kieran O'Connor told BBC Sport the governing body had a plan in place involving Page if Giggs could not take charge of the Wales team at Euro 2020.

Former Wales captain Page has been Giggs' assistant since August 2019, but deputised as manager in November 2020 – leading Wales to top spot in their Nations League group.

He continued to deputise for Giggs in March 2021 as Wales kicked off their 2022 World Cup qualifying campaign with a defeat away to Group E favourites Belgium and a home win over the Czech Republic.