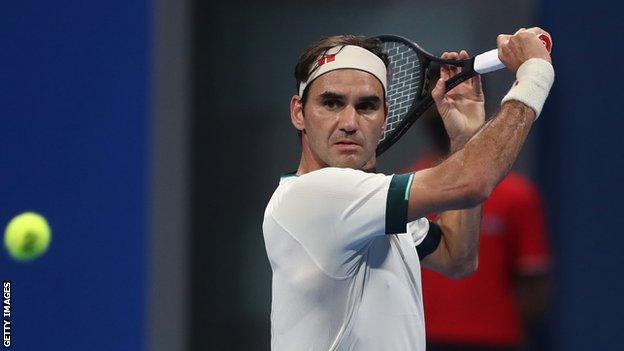 Roger Federer has only played two competitive matches since January 2020

Roger Federer has confirmed he will play in this year's French Open as he continues his return from injury.

Federer, 39, is making his comeback after two knee operations and has not played a Grand Slam since January 2020.

The 20-time Grand Slam winner made his return after 14 months out at last month's Qatar Open but has not played since.

On Sunday, he said will play the clay-court Geneva Open in May followed by Roland Garros, which begins on 30 May.

Federer, who won his only French Open title in 2009, overcame Britain's Dan Evans in his comeback match in Doha last month but was then beaten by Nikoloz Basilashvili in the next round.

After losing to Novak Djokovic in the 2020 Australian Open, he had an operation on his right knee and after a further setback was ruled out of the entire coronavirus-hit season.

He had hoped to return at this year's Australian Open in January but "ran out of time" to regain fitness.

Federer sat out three consecutive French Opens from 2016 because of injury and a wish to manage his workload but returned in 2019, reaching the semi-finals.