Supremacy finished last of eight in the Pavilion Stakes at Ascot in April, but has pleased trainer Clive Cox with his work ahead of the Commonwealth Cup; Watch every race at Royal Ascot live on Sky Sports Racing, June 15-19 Clive Cox expects Supremacy to show his true colours in the Commonwealth Cup at Royal Ascot, following a below-par run on his seasonal debut.

Last season’s Middle Park Stakes hero disappointed in the Pavilion Stakes, the official trial for the six-furlong Group One, but has been pleasing Cox in his preparation for the big day.

The Lambourn trainer said: “Supremacy had a disappointing comeback run, but clearly he wasn’t right for that – which wasn’t obvious before.

“We’re certainly very happy with the way he has trained in the meantime, and I’m hoping he can put that run behind him.”

Cox may have a second Commonwealth Cup contender too with Diligent Harry, who has won three of his four starts on the all-weather. 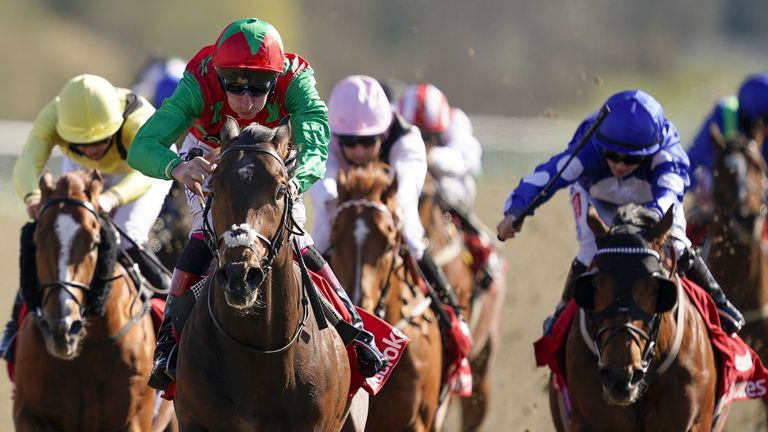 “Another one possibly is Diligent Harry,” he said.

“He’s yet to run on the turf and missed his intended starts in the Carnarvon (at Newbury) and Sandy Lane (at Haydock) because of very soft ground.

“He’s a very exciting, unexposed turf campaigner who did remarkably well on the all-weather.”

Cox’s team at the Royal meeting includes Nando Parrado, who caused a 150-1 upset at Ascot in the Coventry Stakes last summer.

“Nando Parrado is very much an intended runner in the Jersey, over seven,” he said. “He didn’t stretch out over the mile. But we’ve campaigned him on soft ground on numerous occasions, and I’m looking forward to running him back at Ascot – which definitely brought out his best performance in Group Two two-year-old winning form.”

Get Ahead is one of several exciting juveniles Cox is looking forward to running.

He has the Queen Mary Stakes in mind for the Showcasing filly, who won her only start so far at the Berkshire track last month.

“We’re hopefully going to be well represented in most of the two-year-old races, as long as they are healthy and well,” said Cox.

“We have a very nice filly in the Queen Mary in Get Ahead. We have Caturra in the Coventry; Instinctive Move will look towards the Norfolk, and Crazyland will run in either the Albany or the Queen Mary.”

Tis Marvellous is on target to appear at the meeting for the fifth year running.

The sprinter heads for the Wokingham Stakes, in which he was second in 2019 and fourth in 2018. The Harbour Watch gelding was fourth in last year’s King’s Stand Stakes, and sixth in the Commonwealth Cup in 2017.

“He was a Group Three-winner at two and missed last year because of injury. He’s another potentially exciting prospect back in handicap company.

“Dance Fever is in the Buckingham Palace, and we might have a few more in the handicaps. It depends how the weights look.”