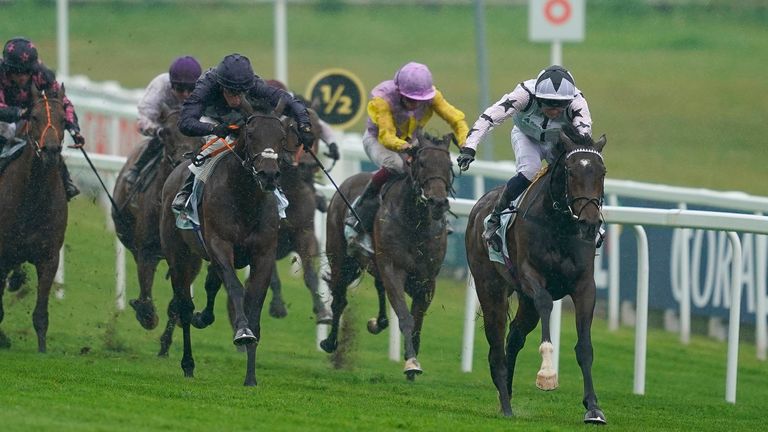 George Boughey may only be in his second season training, but he is heading to Royal Ascot next week with an enviable team.

Boughey has excelled with his juveniles this season and has leading chances in most of the races confined to two-year-olds – but he is far from a one-trick pony.

Oscula, Beautiful Sunshine and Navello will be well fancied for the Albany, Queen Mary and Norfolk respectively, but smart stayer Lostwithiel and recent Doncaster winner Air To Air will keep him interested in the handicaps.

Donnacha O’Brien looking for first Royal winner with ShaleRoyal Ascot live on Sky Sports: All you need to know

It is the Albany, over six furlongs for fillies, in which he holds his strongest hand, though, with five-and-a-half-length Newmarket victor Cachet likely to join recent Epsom winner Oscula.

“Cachet will head to the Albany. Her work was very good before her debut and so her winning wasn’t a massive surprise. I think I’d have been lying if we thought she’d win in the fashion she did, however,” said Boughey.

“She looks like a miler and I think that will probably be where her future lies, at least in her three-year-old career.

“Nicola Currie will keep the ride on her. Nicola has done a lot of work with her and is an ever-increasing member of the team.

“Oscula won the Woodcote Stakes at Epsom last Friday. She will likely head to the Albany as well. She has been a very straightforward filly to train. She is by Galileo Gold who has made a great start as a stallion.

“I’ve never worked her with Cachet, but they are pretty similar fillies.”

Boughey also has two live chances in the Queen Mary with the unbeaten Thunder Love as well as Beautiful Sunshine, but as both run under the Amo Racing banner, only one is likely to take their chance.

“Thunder Love was impressive on both her starts at Kempton. We were planning on running her in the Marygate but the ground went against her,” said Boughey.

“Rossa (Ryan) believes she will be best on a quick surface and the Queen Mary is a possibility, but we are likely to run Beautiful Sunshine there. They are both owned by Amo Racing so we will probably only run one.

“Beautiful Sunshine was very impressive at Sandown under a penalty and they are two very exciting fillies.”

Navello’s winning run came to an end in the National Stakes at Sandown, but Boughey is inclined to blame the slow going for his defeat there.

He said: “The plan before the National Stakes at Sandown was the Norfolk Stakes and we’ve not changed our minds since his third there.

“He hardly picks his feet up off the ground, which suggests a quick ground action. I think we might see a different horse in the Norfolk to the one we saw at Sandown.”

Lostwithiel is among the favourites for the Northumberland Plate but has a couple of options next week first.

“Lostwithiel has been given two entries on Tuesday. Both the Ascot Stakes and the Copper Horse are options for him,” said Boughey.

“He is rated 96 and so would be near the top of the weights in the Ascot Stakes.

“Hollie Doyle has been doing a lot of work with him at home and she will take the ride. He’s a lovely horse with a big future. At this stage, I’d be probably leaning towards the Ascot Stakes.”