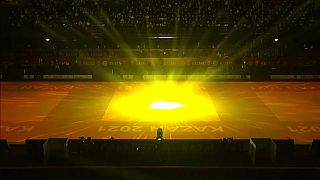 The home team is allowed to field four contestants per category on the World Judo Tour and Russia took full advantage on day two in Kazan.

Makhmadbek Makhmadbekov took Ayub Khazhaliev by surprise for ippon in the all Russian -73kg final.

Before the tournament we prepared together, we lived together and then we ended up in the final together. We agreed that it didn’t matter who won because in the end, we are friends.

Rustam Minnikhanov, the President of the Republic of Tatarstan, awarded the medals.

“Judo is family,” said Makhmadbekov afterwards. “We train all year long together and we are brothers to each other. In the final I faced Ayub Khazhaliev, my teammate. Before the tournament we prepared together, we lived together and then we ended up in the final together. We agreed that it didn’t matter who won because in the end, we are friends.”

Russia’s rising young star Madina Taimazova faced Giovanna Scoccimarro from Germany in the -70kg final. Taimazova dodged sustained pressure from Scoccimarro before launching her own winning counter-attack and securing another gold for the home team.

“It is fantastic to have this Grand Slam here,” she said afterwards. “It helps us get closer to the Olympic Games and also gives us the chance to sharpen our judo technique”

Oleg Matytsin, Minister of Sport of the Russian Federation, made the presentations.

Wins for Hungary and Poland

Alan Khubetsov from Russia faced Hungary’s Attila Ungvari in the final of the -81kg category. A masterful flick of the foot delivered a golden score waza-ari for the Hungarian – and his first victory in a grand slam tournament.

Vasily Anisimov, President of the Judo Federation of Russia, presented the medals.

Poland’s Agata Ozdoba-Blach was up against Brazilian veteran Ketleyn Quadros in the -63kg final. A swift Kouchi attack won it for Ozdoba-Blach.

Igor Levitin, aide to the President of the Russian Federation, awarded the medals.

Day two in Kazan was a day of unpredictable contests, with some stars confirming their status and others falling unexpectedly by the wayside. It made for great watching, on one of the most exciting stops on the World Judo Tour.