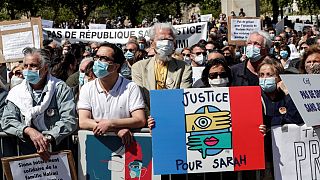 Crowds gathered in Paris and other French cities on Sunday to denounce a ruling by France’s highest court that the killer of a Jewish woman, Sarah Halimi, was not criminally responsible and will not stand trial.

Thousands filled the Trocadero Plaza in Paris, in front of the Eiffel Tower, in response to a call by Jewish associations and organizations fighting antisemitism.

The Court of Cassation’s ruling earlier this month that the killer would not face trial had sparked outrage among the French and international Jewish community.

Halimi, 65, died in 2017 after being pushed out of the window of her Paris apartment by her neighbour Kobili Traoré, who allegedly shouted: “Allahu Akbar” (“God is great” in Arabic). Traoré has since admitted pushing her.

Killer given a reprieve due to compromised state

The ruling had conceded there was enough evidence to show the act had antisemitic motives.

But the court also said that Traoré, who is known to have smoked heavy quantities of cannabis in the past, could not stand trial due to having been in a “delirious state” at the time.

“According to unanimous opinions of different psychiatry experts, that man was presenting at the time of the facts a severe delirious state,” t he court said in a statement.

Under French law, people cannot be held criminally responsible for actions committed while experiencing a loss of judgment or self-control due to a psychiatric disorder.

Traoré has been held in a specialized unit of a psychiatric hospital since Halimi’s death.

French President Emmanuel Macron has called for a change in French law to address this issue. In a recent interview with Le Figaro newspaper, he said: “Deciding to take narcotics and then ‘going mad’ should, not in my view, remove your criminal responsibility.”

Justice Minister Eric Dupond-Moretti tweeted on Sunday that he will present a bill in May to plug a legal vacuum in French law regarding the consequences of the voluntary use of drugs.

Tweet reads: “In accordance with the request of the President, the government will present at the end of May in the Council of Ministers a bill to fill the legal vacuum which appeared in the Sarah Halimi affair. This tragic story that has marked us all will advance our law.”

Among those in Trocadero Plaza on Sunday was Robert Ejnes, executive director of French-Jewish organisation CRIF. He said he was there to support Halimi’s family, adding: “I think they are like the French people: they’re angry and don’t understand at all.

“Here are people who trust France’s government, France’s justice system, and who are confronted with this totally unfair decision.

Ilaï Laymond, a 19-year-old law student protesting in Paris, told AP he was there because “as a Jew but also as a French citizen, this court ruling affects me profoundly because it’s inexplicable. We feel abandoned.”

Protests against the ruling were also held in Israel and the UK on Sunday.