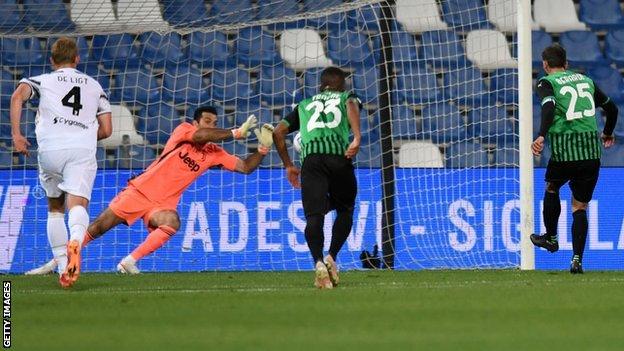 Veteran goalkeeper Gianluigi Buffon saved a penalty as Juventus beat Sassuolo to keep alive their hopes of qualifying for the Champions League.

Buffon, 43, has announced he will be leaving Juve at the end of the season and denied Sassuolo a lead by saving Domenico Berardi's first-half penalty.

Adrien Rabiot fired Juventus ahead with a low shot, before Cristiano Ronaldo scored his 100th goal for the club.

Giacomo Raspadori pulled one back, but Paulo Dybala got a third for Juventus.

Juventus had won the title in each of the previous nine years, but, under Andrea Pirlo, have struggled in the league and are fifth in Serie A with two matches to go.

They need to beat champions Inter Milan on Saturday and win at Bologna on 23 May and hope Atalanta, AC Milan or Napoli drop points to finish in the top four and qualify for the Champions League.

Buffon has won Serie A 10 times with Juventus in two spells with the club and was making his 657th Serie A appearance, although it was only his seventh league game of the season.

Earlier this week, Buffon said he had "reached the end of a cycle" at Juventus and that "this beautiful and very long experience will come to a definitive end this year".

Yet he still showed his agility in the 15th minute to dive to his left to parry Berardi's spot-kick after Leonardo Bonucci tripped Raspadori.

At 43 years and 104 days, Buffon is now the oldest goalkeeper to save a penalty in Serie A history.

Juventus went ahead 12 minutes later through Rabiot's strike, which went in off the foot of the post, before Ronaldo doubled their lead just before half-time from 14 yards out.

Buffon, who made another fine save to deny Pedro Obiang, was beaten in the second half when Raspadori calmly finished after a one-two with Manuel Locatelli.

However, the visitors quickly restored their two-goal advantage with Dejan Kulusevski's through ball leading to a fine lofted finish from Dybala as the Argentine also reached a century of Juventus goals.

Ronaldo nearly got his second of the night late on but his angled shot bounced off the post.

Milan hit seven to stay on course for Champions League

Juventus are now one point behind fourth-placed Napoli, while Atalanta and AC Milan are second and third respectively.

Goals from Luis Muriel and Mario Pasalic gave Atalanta a 2-0 win at home against a Benevento side that ended the match with 10 men as defender Luca Caldirola was sent off for two bookable offences late on.

Champions Inter Milan won 3-1 against Roma at the San Siro thanks to goals from Marcelo Brozovic, Matias Vecino and Romelu Lukaku, with former Manchester United and Arsenal midfielder Henrikh Mkhitaryan scoring for Roma, who will be managed by Jose Mourinho next season.

With two games remaining, Atalanta are second on 75 points, level with AC Milan, with Napoli on 73 points and Juventus on 72.