Saturday’s Heineken Cup Champions Cup round-of-16 ties: Wasps vs Clermont at the Ricoh Arena, Munster vs Toulouse at Thomond Park, Exeter vs Lyon at Sandy Park; we look at previous meetings, form, statistics and team news for both matches ahead of respective kick-offs Some of the biggest names in rugby will be in European Cup round-of-16 action on Saturday, including Cheslin Kolbe, CJ Stander and Stuart Hogg

Wasps and Clermont have met just twice before in the Champions Cup: a pair of pool-stage matches back in 2007/08 which were both won by the home side on the day.

Wasps were one of only three sides to claim a maximum 10 match points from their two pool-stage matches on the pitch in the Champions Cup this season, beating both Montpellier and Dragons with try-scoring bonus points.

At home, Wasps have lost just one of their last 14 home games against Top 14 opposition (W12, D1). Clermont meanwhile, lost at home to Munster back in Round 2 in December, but have not lost back-to-back matches in the Champions Cup since January 2016.

This season, Clermont have scored the most points (82) and joint-most tries (11) in the competition, while Wasps have won 15-of-15 scrums on their own feed – no side left in the competition has won as many while maintaining a 100 per cent success rate this season.

Clermont have also missed the most tackles (47) and have the lowest tackle success rate (82 per cent) of any side in Europe this season.

Wasps wing Josh Bassett has made 150 metres from 11 carries this season, giving him the best average gain (13.6) of anyone to make 10 or more carries.

Clermont’s Damian Penaud has beaten more defenders (11) than any other player this season, with team-mate George Moala ranked joint-second (10).

The second offering on Saturday is perhaps a contender for tie of the round, as two of the form sides in Europe face off in Limerick.

Toulouse currently lead the Top 14 table and have featured at the semi-final stage of the European Cup in the last two seasons, while Munster, who lost the PRO14 final to Leinster last weekend, have featured in the Champions Cup semi-finals in three of the last four seasons. Munster have hosted Toulouse twice before in the Champions Cup, both of which have been at the quarter-final stage of the competition. The Irish side won both those encounters by large margins: 47-23 in 2013/14 and 41-16 in 2016/17. Munster have not lost a home European game since 2015

Munster are unbeaten at home in six years and 16 games in the Champions Cup (W15, D1), their last such defeat coming in 2015 against Leicester Tigers.

At home throughout history, Munster have won nine of their 10 knockout games in the Champions Cup – Ulster in 2012 the only side to beat them in such a match.

Toulouse have won both of their last two away games against Irish opponents in the Champions Cup, beating both Connacht and Ulster in 2020 – as many wins as they’d managed in their previous 10 such matches.

Statistically, Munster full-back Mike Haley ranks third for metres gained (178) in the Champions Cup this season, and also ranks joint-fourth for most carries (24, level with five others). Munster’s JJ Hanrahan (30) is the top point-scorer this season, slotting 3-of-3 conversions and 8-of-9 penalty goal attempts.

Experienced wing Keith Earls needs one more try to score his 20th in the Champions Cup – he would be the third player to achieve this for Munster after Simon Zebo and Anthony Foley (both 23).

The third meeting on Saturday sees reigning champions Exeter host Lyon – the French side newcomers to this stage of the competition.

The clash will also be the first-ever meeting between Exeter and Lyon in European competition.

The Chiefs have won their last seven home games in a row in the tournament – one more win would set a club record for consecutive home wins in Europe (across both the Champions Cup and Challenge Cup). 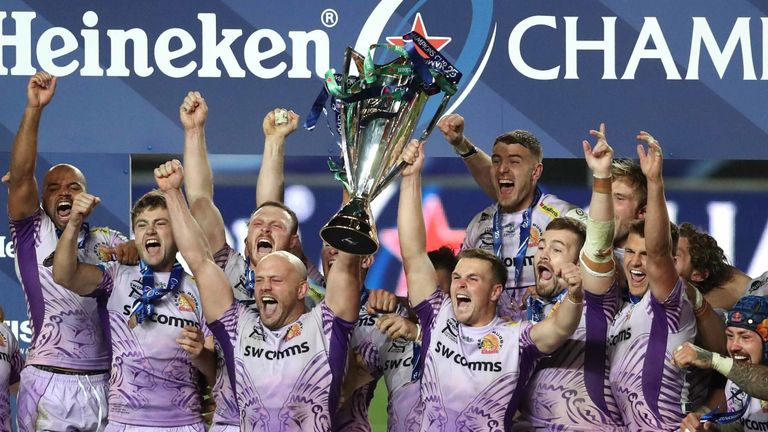 Exeter have won their last five completed fixtures against French opponents in the Champions Cup – as many as they had recorded in all of their previous 15 such matches.

Lyon are playing their first-ever knockout match in European competition, and will be looking for a first Champions Cup victory away from home having lost six before now.

Exeter beat Glasgow 42-0 in Round 1 earlier this season, their biggest ever win in the Heineken Champions Cup. 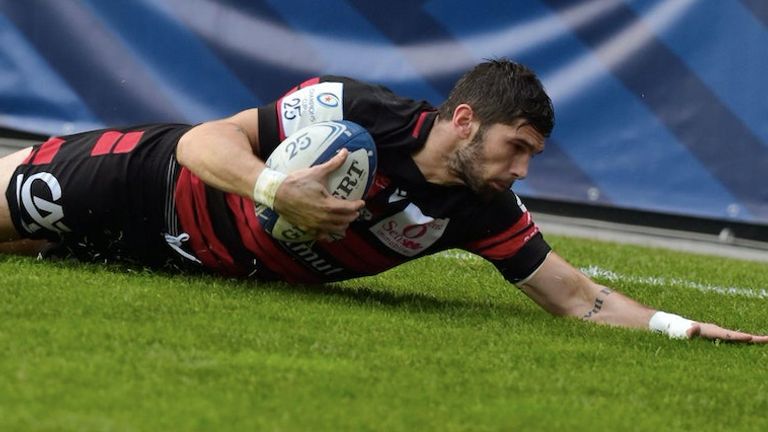 Chiefs No 8 Sam Simmonds has won a joint-high four turnovers in the Champions Cup this season, despite playing just one game, in which he also scored a try and made 8/8 tackles.

Lyon back Xavier Mignot has been involved in five tries this season (three tries, two assists) – the most of any player, despite making just one appearance (vs Gloucester).

Exeter fly-half Joe Simmonds has landed all six of his shots at goal in the Champions Cup this season, only Louis Carbonel (Toulon, 6/6) has had as many attempts without missing.