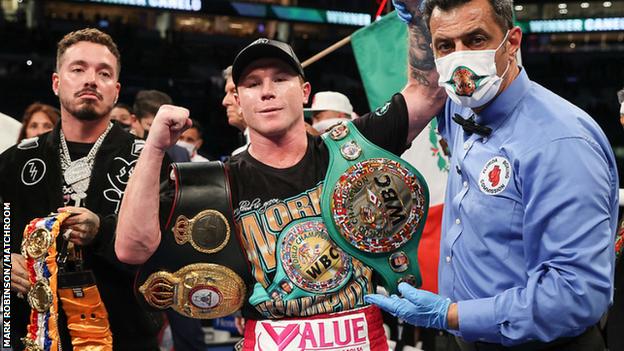 Alvarez has lost just once in 58 contests

Briton Billy Joe Saunders will take on Saul 'Canelo' Alvarez in front of more than 60,000 fans at the home of the Dallas Cowboys on 8 May.

The bout – at the AT&T Stadium in Texas – will deliver boxing's biggest crowd since the Covid-19 pandemic began.

Mexican Alvarez will fight on his country's Cinco de Mayo weekend and three of the four world titles at super-middleweight will be on the line.

The WBA and WBC champion has remained active since the Covid-19 pandemic began, earning wins over Callum Smith and Avni Yildirim in recent months.

High-profile sporting events including rugby league and international cricket have taken place in front of significant crowds in recent months, while strict Covid-19 measures have ensured such attendances were unachievable in the UK.

Around 25,000 fans attended the NFL's Super Bowl in Tampa, Florida, in February.

WBO champion Saunders, 31, has 30 wins from 30 fights while Alvarez has lost just once in 58 outings, to Floyd Mayweather in 2013.