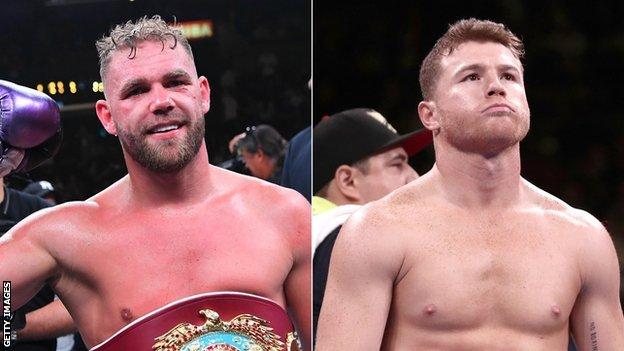 Billy Joe Saunders has told those who criticise him that he will "carry on going the wrong way".

Saunders has been condemned in the past for behaviour outside the ring – while inside it, his fight displays have drawn mixed reviews.

Saunders, who has won all 30 of his professional fights, became a two-weight world champion in 2019.

He now puts his WBO super-middleweight title on the line against Alvarez, who holds two of the other three belts in the division – the WBC and WBA titles.

Saunders has, however, attracted significant negative publicity during his career.

"I don't want to go 'right' if I've done it wrong. I do not want to go right. I will carry on doing it like this. I want to carry on going the wrong way."

Saunders was fined £100,000 by the British Boxing Board of Control for a social media video that police described as "sickening" in 2018.

He returned an adverse Voluntary Anti-Doping Association test in the same year and gave up his WBO world middleweight title outside of the ring.

A further fine of £15,000 followed in 2020 after he posted a social media video about how men could hit their female partners.

Saunders apologised at the time, saying he would "never condone domestic violence".

On Saturday, he faces a contest against Alvarez, who has lost just once – to Floyd Mayweather – in 58 fights, and who has held world titles in four weight divisions.

The 30-year-old's status as the sport's best-paid star has made him a target for fighters such as Saunders for several years.

"I've planned this out in my head and I've been dreaming about this since I was a little boy fighting in my front room," said Saunders.

"I've had dreams of this day happening since I was about five or six years old… I've got all the way here.

"This will be the biggest upset in boxing history, I believe. Certainly in the last 20 years. I believe this is meant to be.