Sean O’Malley faces Thomas Almeida in a bantamweight clash at UFC 260 this weekend. ‘Sugar’ speaks to Sky Sports ahead of the fight, detailing how he is looking to prove his doubters wrong. 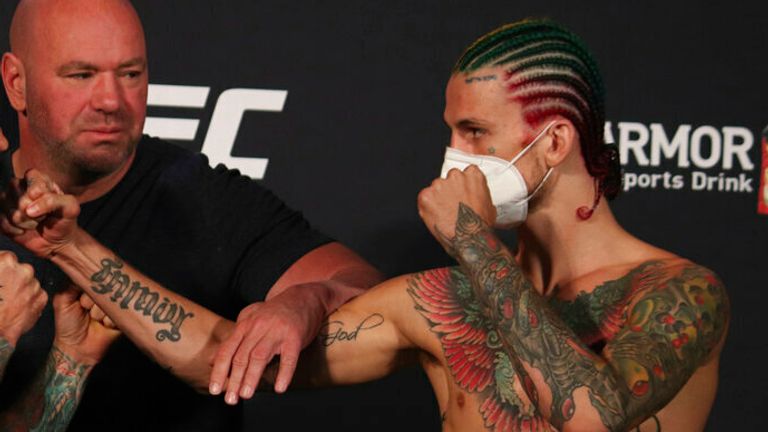 Bantamweight star Sean O’Malley is relishing the prospect of proving his doubters wrong this weekend at UFC 260.

The Montana native is coming off the back of his first professional defeat, having suffered a TKO loss to Marlon Vera last August.

However, O’Malley feels he is still undefeated having carried an injury into the fight.

“I didn’t think it was that big of a deal when I said, ‘I’m mentally undefeated’. Looking at the fight, I didn’t lose because my skillset wasn’t as good as his. I lost due to an injury,” he told Sky Sports.

“A lot of people, even fighters, said ‘handle your loss like a man’. It is what it is. I stick to how I feel. I’m going to be myself regardless.”

And the 26-year-old has the opportunity to set the record straight this weekend in Las Vegas.

“I enjoy proving people wrong. I’ve been like that since I was a little dude,” he grinned.

On Saturday night, he will throw down with Thomas Almeida (22-4), and it is a challenge he is not underestimating.

“The dude is dangerous. He’s had a lot of fights. He’s had twice as many pro fights as I do. He’s a good kick-boxer, he’s technical, and he’s lost to really good guys. I don’t look at him as an easy fight. This is a tough dude. He’s dangerous, even more dangerous coming off three losses [because] he’s fighting for his job,” O’Malley noted.

“So he’s a legitimate opponent. It’s a fun puzzle for me to solve. O’Malley is currently outside the top 15-ranked fighters in the UFC bantamweight division. However, he is adamant that if he wins this weekend, he will nonetheless draw another big fight.

“Rankings, I never cared about rankings. I have a good name. I can go out there and knock him out in spectacular fashion, I can get a big-time fight,” he smiled.

“There are a lot of big bantamweight fights coming up. We’ll see.”

So what can be expected from O’Malley on Saturday night?