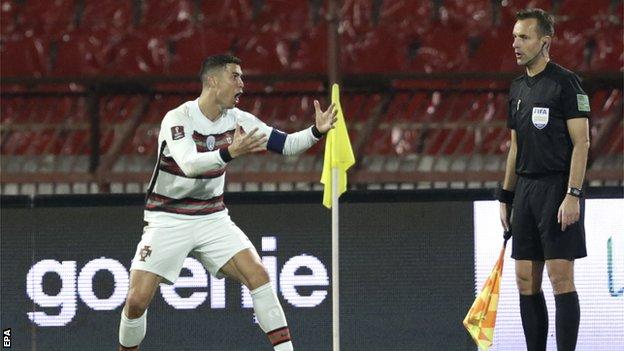 Cristiano Ronaldo stormed off the pitch at full time when he was denied a stoppage-time winner in Portugal's 2-2 draw in Serbia.

Liverpool's Diogo Jota scored two headers for the Group A favourites before Serbia fought back in their World Cup qualifier.

Aleksandar Mitrovic pulled one back before Filip Kostic slotted in.

But the visitors were furious when Ronaldo's late effort was judged not to have crossed the line.

The Juventus forward thought he had scored with his angled shot and was aghast when the officials ruled he had not. There was no goalline technology available for the match.

Portugal's all-time leading scorer was booked for protesting, and at the final whistle threw his captain's armband to the turf and stormed down the tunnel at the Rajko Mitic Stadium in Belgrade.

"There are moments which are tough to digest especially when we feel the entire nation is being punished," Ronaldo said on Instagram. "We will keep our heads up and move on to the next challenge."

Also in stoppage time, Serbia were reduced to 10 men when Nikola Milenkovic was shown a straight red for a foul on Porto's Danilo Pereira.

He said: "The referee apologised to me straight after the game and we now have to move on.

"It was a clear goal but there is nothing we can do now. We controlled the first half but lost our focus in the second and failed to contain Serbia as they surged forward."