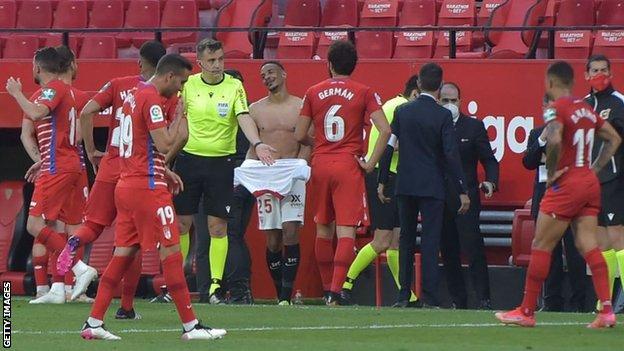 Winger Lucas Ocampos said he had "never seen anything like it" after Sevilla and Granada were told to return to the pitch and play the final minute of their La Liga game on Sunday.

Sevilla won 2-1 to keep themselves in the title race, but only after referee Ricardo de Burgos blew for full-time 60 seconds too early.

Despite four minutes being added on, De Burgos called time after 93 minutes.

Some players had started taking their kit off before being asked to return.

"I've never seen anything like it." said Sevilla's Ocampos. "We had basically taken our kit off."

Granada, who pulled a goal back through Roberto Soldado in the 90th minute, protested to the referee when the final whistle went.

De Burgos realised his error and the game restarted several minutes later, though Sevilla midfielder Fernando had taken his shirt off and Marcos Acuna had to put his boots, socks and shinpads back on.

"They make mistakes like we all do and he tried to rectify it," said Granada boss Diego Martinez. "Although it did hurt us because we were chasing a goal and the dynamic wasn't the same."

Sevilla secured the win thanks to Ivan Rakitic's penalty in the first half and an Ocampos strike early in the second, to stay in fourth place and move within three points of leaders Atletico Madrid.

"There was a problem with the watch or something like that," said Sevilla coach Julen Lopetegui.

"It was a strange situation, with a lot of confusion. But I don't want to put it in the news. It happened, we all make mistakes."