Mayank Agarwal, standing in as Punjab Kings captain after KL Rahul was hospitalised with appendicitis, struck 99 not out but it was not enough to rescue his side from a seven-wicket loss to Delhi Capitals 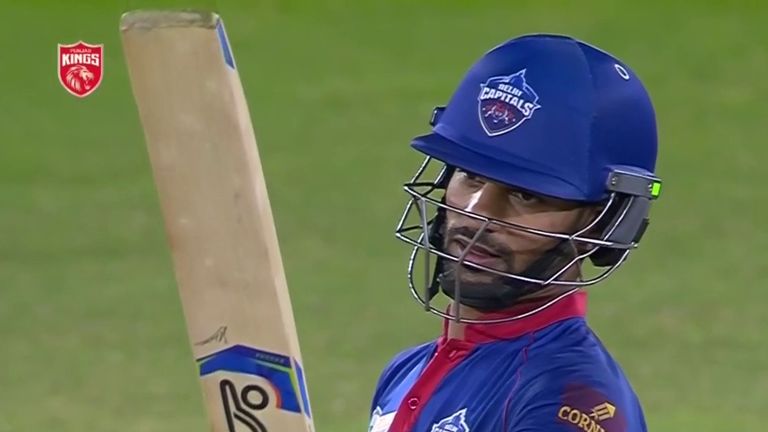 Shikhar Dhawan blazed an undefeated 69 from 47 balls to take Delhi Capitals top of the IPL standings after hammering Punjab Kings by seven wickets in Ahmedabad.

Dhawan’s ruthless knock – his third half-century of this year’s tournament and second against Punjab – ensured that the Capitals cruised home with 14 balls to spare and moved above Chennai Super Kings at the summit.

It meant a valiant unbeaten 99 from Punjab’s stand-in captain Mayank Agarwal, who took over the reins after KL Rahul was ruled out of the rest of the competition with appendicitis, proved to be in vain. 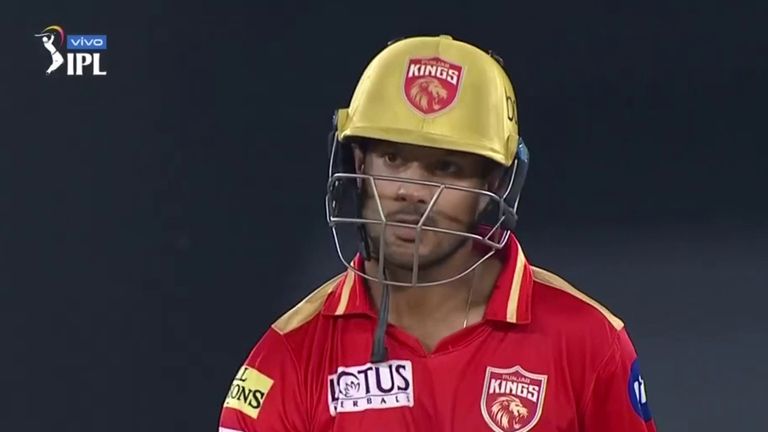 Mayank Agarwal hit 99 not out after taking over as Punjab Kings from KL Rahul, who has been hospitalised with appendicitis

Mayank’s 58-ball innings underpinned his side’s total of 166-6 after Delhi had opted to bowl, but the bowlers were unable to contain Dhawan and Prithvi Shaw, who laid the foundations for victory with an opening stand of 63.

Mayank survived an early scare with just three to his name, when he speared Ishant Sharma towards the third man boundary but Avesh Khan was unable to hold a difficult diving catch.

However, Steve Smith did just that soon afterwards, leaping to remove Prabhsimran Singh (12) off Kagiso Rabada (3-36) – who then stunned Chris Gayle (13) with a change of pace that sent his middle and off stumps flying. 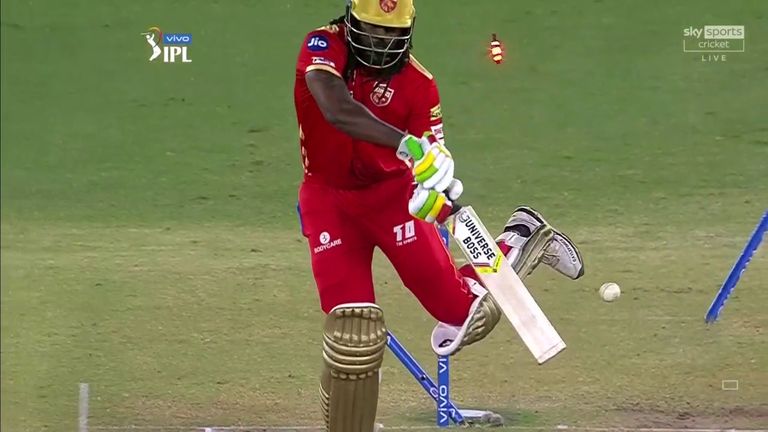 Chris Gayle’s stumps were sent flying as he was bowled by a near 90mph full toss from Kagiso Rabada in the IPL!

Gayle’s departure brought Dawid Malan to the crease for his Kings debut and the England batsman appeared to be easing into his stride, accumulating 26 at a run a ball until he misjudged a straight delivery from Axar Patel (1-21).

Two balls later, the Kings were 88-4 after a horrendous mix-up that saw both batsmen at the same end, but it was Deepak Hooda (1), rather than Mayank, who was ordered on his way.

Punjab’s hopes of a sizeable total rested on their stand-in captain, who embraced that responsibility as he started to accelerate, ending the innings with a flourish as Avesh’s last three balls disappeared for 14. 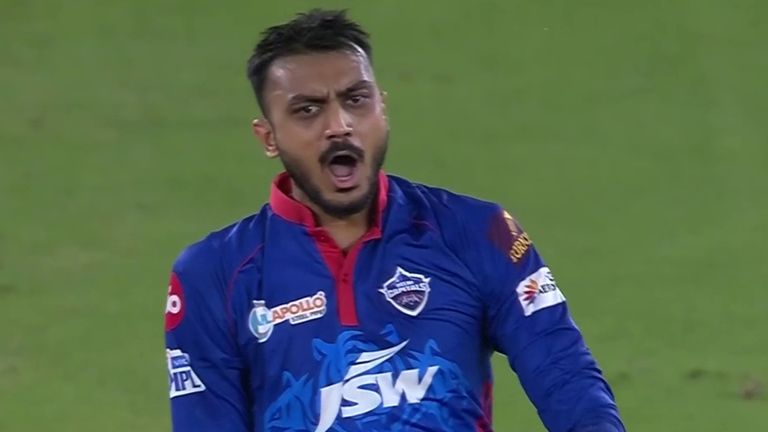 The target of 167 soon began to look inadequate as the in-form Shaw (39 from 22) savaged Kings’ powerplay bowling, clubbing Ravi Bishnoi’s first delivery for six and hoisting Chris Jordan for another maximum to bring up 50 in the fifth over.

Although left-armer Harpreet Brar (1-19) removed Shaw with his first ball, getting it to turn and hit off stump, Dhawan and Smith (24 from 22) made steady progress during the middle overs, sharing a partnership of 48.

Riley Meredith (1-35) eventually made the breakthrough when Smith holed out to Malan in the deep, but Dhawan brushed off the loss of his partner, creaming Bishnoi over midwicket to reach his half-century from 35 balls.

Delhi skipper Rishabh Pant (14 from 11) lost both his bat and his wicket by miscuing Jordan into the hands of mid-off, but it made little difference to the outcome.

Shimron Hetmyer (16) swiftly applied the finishing touch, thrashing Meredith for back-to-back sixes and a four before the hapless speedster sent down successive wides to end the match.