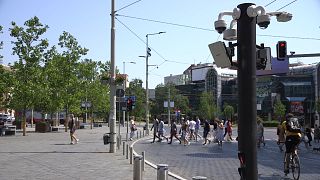 Since 2019, the Serbian government has been working on implementing a surveillance project in Belgrade.

Part of this project includes installing thousands of smart surveillance cameras across the city. All of these cameras were provided by the Chinese tech giant, Huawei.

These cameras have attracted the attention of the public, activists and even institutions within the European Union.

Are the cameras simply protecting citizens in Belgrade? Or could they also be used to track them?

We travelled to the Serbian capital to find out more.

An eye in the sky

On one of Belgrade’s busy streets, the cybersecurity expert and digital forensics engineer, Andrej Petrovski, shows us one of the latest cameras. He tells us that it can be used for facial recognition.

“These cameras have the ability to recognize faces, to recognize objects, license plates, basically any human transaction that is happening around them”, he explains.

According to him, all this information can be stored in a database managed by the Interior Ministry and police. This potentially means that they could analyse the data, “and cross-reference them with other data sources, and other pieces of information they might have”.

Digital rights activists say they have located at least 1200 smart cameras around the city.

Belgrade is quite a safe city. As experts, we don´t think that there are any reasonable foundations for implementing such an intrusive system in a city like Belgrade

Authorities adamantly deny that any facial recognition software is active or in use. They argue that the cameras are just controlling traffic and helping fight crime in the usual ways.

Activists are dubious of this. They show me a diagram they’ve drawn of what they say is the government’s surveillance platform. 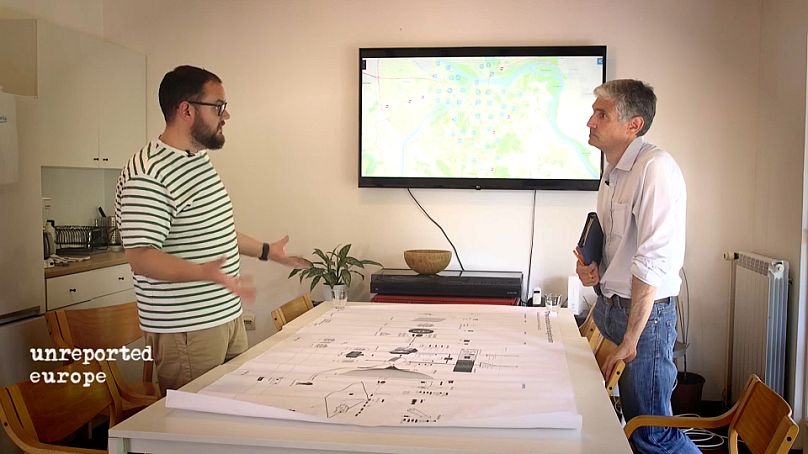 Andrej Petrovski showing reporter, Julian Gomez, what he says is a diagram of the government’s surveillance platformeuronews

The reason that Andrej and others believe the government is looking to use biometric surveillance is because it consulted the Commissioner for Personal Data Protection.

In Andrej’s words, “the Ministry of Interior, the Police, have produced two data-protection impact assessments, which are basically documents prescribed with the law on data protection in Serbia and submitted those to the Commissioner for Data Protection, which is the data protection authority in Serbia”.

The cybersecurity expert says that the Commissioner rejected both impact assessments because they were not comprehensive enough. Andrej got his information for his diagram from these assessments.

Five years ago, Serbia’s Interior Ministry and Huawei signed a contract aimed at increasing street security. The total cost of this is unknown, but critics say it reaches tens of millions of euros.

Critics also believe that the new cameras appear to have popped up everywhere during the pandemic lockdown in 2019. This has only fuelled their suspicions.

Despite repeatedly contacting the President and the Prime Minister’s offices, the Interior Ministry and the Police, no one accepted to meet or talk to us about the cameras.

However, the Commissioner for Personal Data Protection, Milan Marinović, did agree to answer our questions. 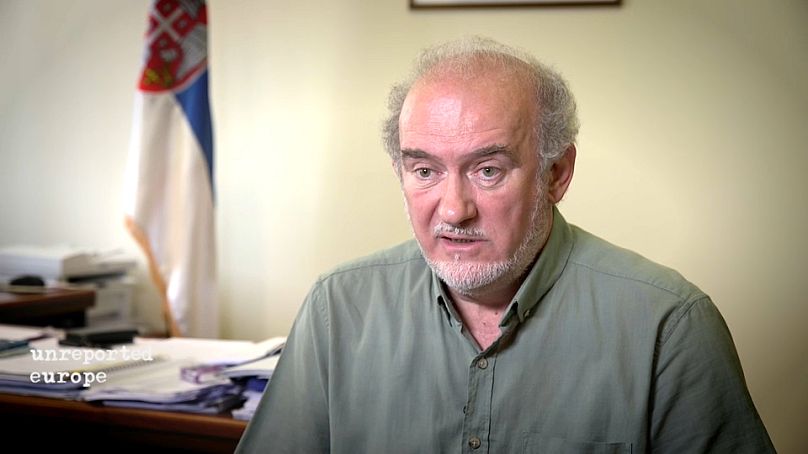 He tells us that the government has reassured him that no facial recognition software is in use, as current laws don´t allow biometric data to be processed.

When asked why smart cameras had therefore been installed, he acknowledged that the process lacks transparency.

“Little is known, and that creates suspicion among citizens. That is something that should not happen. I think there is no reason for the government or for the Ministry of Internal Affairs to withhold information on their ‘Safe City’ and ‘Safe Society’ plans, on where those plans are at the moment, and how those plans are executed”, he explains.

As Commissioner for Personal Data Protection, he receives complaints and questions from citizens. He admits that there are more and more people “worried about the number of cameras being installed”. People are also increasingly asking whether their personal data are being processed.

If Serbia is not using its smart cameras now, will it use them down the line?

Hopes of joining the EU

Serbia is a candidate to join the European Union and Europe has raised concerns.

Ana Pisonero, an EU spokesperson for Enlargement, explains that current EU data protection rules forbid biometric data from being processed unless it’s for personal identification and even that is under very specific conditions.

The EU is monitoring the topic. After discussions between the EU and Serbia on this matter, “Serbia has put on hold the processing of biometric personal data until the relevant legislation is amended and aligned with the law on personal data protection”, Pisonero adds.

Should citizens worry about the smart cameras installed across Belgrade?

Easy to use technology

Experts in cybersecurity say that technology has made real-time surveillance readily available, affordable and risky.

To raise awareness, Vladimir Radunović a lecturer on cybersecurity policy and his team, have equipped an old coffee machine with cameras, sensors, microphones and a simple software able to easily stock all kinds of data. 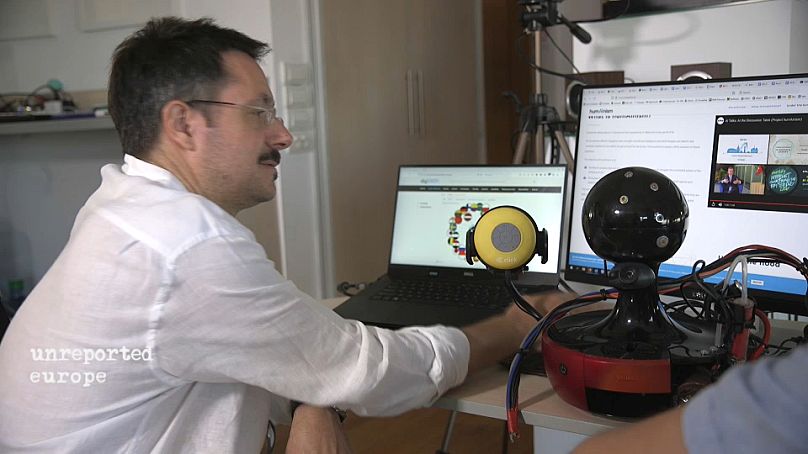 Vladimir Radunović and his coffee machine set up with surveillance capacitieseuronews

He says that if you have cameras around the city and you’re just moving around and someone puts a marker down, your movements can literally be followed in real-time. He mentions that most people say they don’t care because they argue that they’re not criminals, so why would it matter if they can be followed? However, he believes that as human beings, “we need some sort of privacy, even if we did not do anything wrong”.

Other than personal privacy, what are the potential dangers of smart surveillance for human rights?

We meet Nevena Ruzić, a lawyer working for the George Soros-backed Open Society Foundation tasked with spreading civil liberties. She says a public debate on citizens’ rights and freedoms is long overdue in the country. 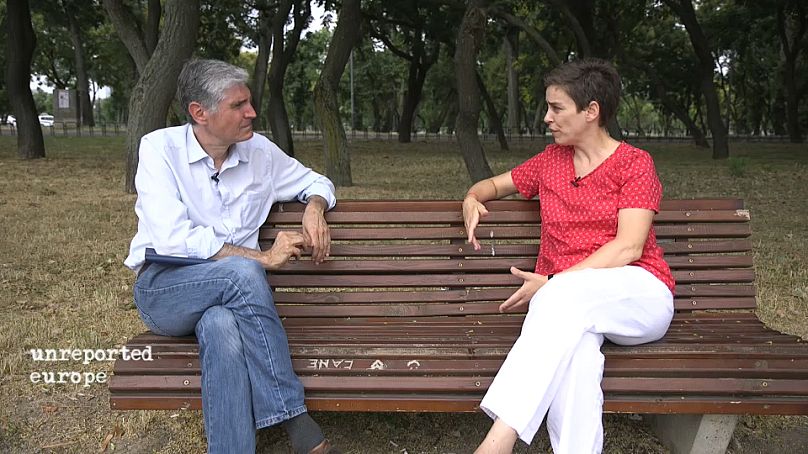 To her, these surveillance cameras are all about “freedom of movement, freedom of expression, freedom of assembly”.

“We need to balance the measures proposed, such as, for example, facial recognition all over the city for the purpose of fighting against crime, as it is, without any specification, without any limitation, against those rights and freedoms,” she adds.

The Serbian government’s reluctance to clarify the reason why it installed a system of mass surveillance, albeit inoperative for the time being, has fuelled a climate of suspicion.