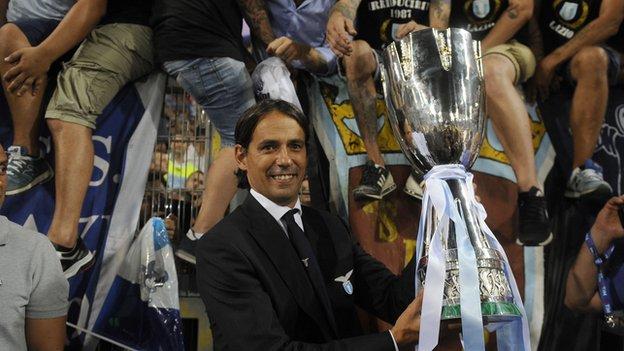 The 45-year-old joins the Italian champions on a two-year contract, ending a 22-year association with Lazio.

Inzaghi, who has won the Coppa Italia and two Italian Super Cups as a manager, guided Lazio to sixth in Serie A last term.

As a player, he won multiple honours while in Rome, including the Scudetto.

Inzaghi, the younger brother of former Juventus and AC Milan striker Filippo, also led Lazio to the last-16 stage in the Champions League in 2020-21, in what was their return to the main competition after an absence of 13 years.

However, expectations at the San Siro are likely to be markedly different largely because of the work of his predecessor.

Conte presided over two successful campaigns as Inter boss, reaching the Europa League final and finishing runners-up to Juventus in the Italian top flight, before securing their first Scudetto since 2010 this year.

Inzaghi made the switch to management at the end of his playing career in 2010, working in Lazio's youth set-up before becoming interim boss and then the permanent manager of the club in 2016.

Cristiano Ronaldo: How did he became the world's biggest one man footballing brand?When I Was 25: Olympian Dame Kelly Holmes opens up about about some incredibly difficult decisions
Source