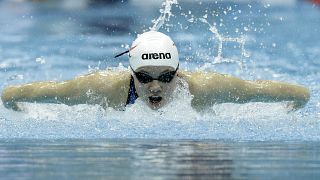 Alicja Tchorz competes in a heat for the women's 200m individual medley during the 2012 British Swimming Championship selection trials.

Six Polish swimmers have been forced to leave the 2020 Tokyo Olympics after an administrative error resulted in the country having too many competitors.

They had already arrived in Japan when the National Olympic Committee announced on Saturday that the Polish Swimming Federation (PZP) had nominated too many athletes to compete, and the squad needed to be cut down to 17 members, based on the world governing body FINA’s qualifying rules.

Some of the swimmers also failed to meet the necessary eligibility to participate in the Games.

In order to be safely admitted to the Olympics, swimmers have to undercut the so-called “A standard”, or must receive a special confirmation from the World Federation.

The swimmers, who returned to Poland on Sunday, have threatened legal action and called on the PZP president to resign.

In an open letter, 22 of the 23 members of the swimming squad said the federation’s head Pawel Slominski had acted with “incompetence”.

“Imagine dedicating five years of your life and striving for another start at the most important sporting event, giving up your private life and work, sacrificing your family and your dedication results in a total flop,” said Tchorz, who had competed in the 2012 and 2016 Olympics.

Chowaniec, another of those sent home, added on Instagram: “I’m deeply shocked by what happened. This is an absurd situation for me that should never have happened. I hope to wake up from this nightmare eventually.”

In a statement, Slominski acknowledged the mistake and apologised for the administrative error.

“I express great regret, sadness, and bitterness about the situation related to the qualification of our swimmers for the Olympic Games in Tokyo,” he said.

“Such a situation should not take place, and the reaction of the swimmers, their emotions, the attack on the Polish Swimming Federation is understandable to me and justified.”

Poland’s sports minister Piotr Glinski has demanded clarification from the federation on how the error occurred.