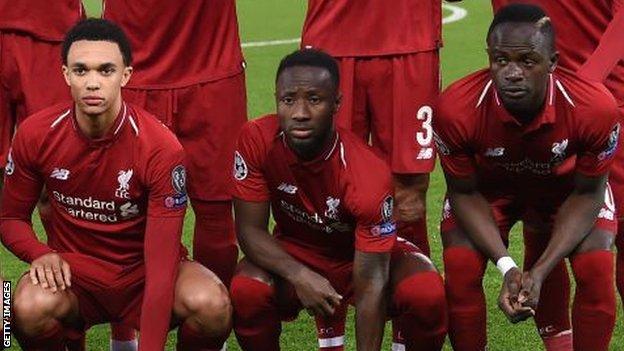 The players were sent racist emojis on Instagram in the lead up to Tuesday's Champions League tie with Real Madrid.

The Premier League club said they will work with relevant authorities to try to identify and prosecute offenders.

Liverpool, however, added it "will not be enough until the strongest possible preventative measures are taken".

In a statement, the club condemned the abuse as "utterly unacceptable".

"Once again we are sadly discussing abhorrent racial abuse the morning after a football game," they said after Tuesday night's Champions League quarter-final first leg defeat by Real Madrid.

"As a club, we will offer our players any and all support that they may require. The current situation cannot be allowed to continue and it is incumbent on all of us to ensure it does not."

There have been several recent incidents of players receiving racist abuse on social media.

West Midlands Police said: "We will never accept or tolerate social media attacks on anyone simply for being who they are. Like all hate crimes we will investigate and pursue the offenders with vigour."

Former Arsenal and France striker Thierry Henry last week removed himself from all social media because of racism and bullying across platforms.

In an interview with BBC's Newsnight programme, the 43-year-old said "enough was enough" and that he had to make a stand against racism on social media.

The UK government has previously threatened social media companies with "large fines" which could amount to "billions of pounds" if they fail to tackle abuse on their platforms.

Facebook, which owns Instagram, said in February that tougher measures would be taken to tackle the issue.

A Facebook spokesperson called the abuse "abhorrent", adding: "We do not want it on Instagram and we swiftly removed a number of comments and accounts that broke our rules.

"We recently announced tougher measures to tackle this behaviour and we are committed to doing everything we can to fight hate and racism on our platforms."