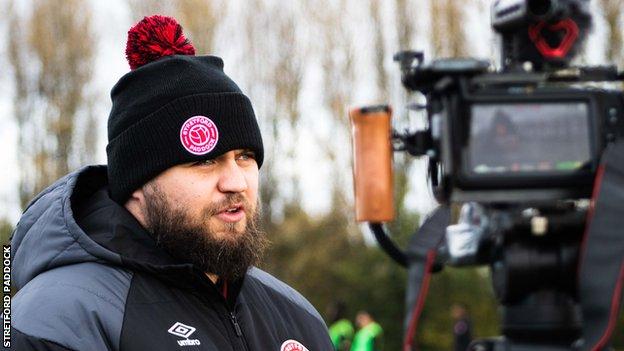 When the Lancashire and Cheshire First Division was briefly brought out of its 43-day pandemic-enforced exile in mid-December, Trafford United's defenders could have been forgiven for wishing they hadn't shown up.

Under the floodlights of the 3G pitch at the Wright Robinson College in Gorton, Manchester, the away side found themselves on the wrong end of a 6-3 defeat. They were run ragged by what must be the most talent-rich forward line in their division and several above. It was comprised of a striker who won the European Under-19 Championship with England in 2017, a winger who represented Liverpool at youth level and another wide forward who played in League One last season.

Stretford Paddock FC were only admitted to the 14th tier of the football pyramid for the 2020-21 season, but they are hopeful of a quick escape from the division. And if the start-up club's ambitions are realised, these will be mere humble beginnings in a thoroughly modern success story.

The club was founded by Stephen Howson, a prominent Manchester United YouTube personality with more than 100,000 Twitter followers and almost 50,000 subscribers to his Stretford Paddock channel. Inspired by his participation with the Full Time Devils crew in the 2017 FanLeague Cup – a London-based 11-a-side tournament bringing together Fan TV teams from around the country – and by the success of Hashtag United, another YouTube-spawned club, he decided to create a team made up of those he employs to run the channel he created in 2019.

"We were having a good laugh doing it," Howson explains. "It's always been about football. We've enjoyed playing football together, we've enjoyed filming the content and people have enjoyed watching it."

Fan interest in the club gathered steam and trials were held to recruit the best regional players. Howson installed himself as manager, documenting the team's growth and his own fortunes at the helm in a video series for Paddock's YouTube channel.

"I thought it was a really good opportunity to learn more about the game," says Howson, who played rugby league for Salford before joining the army at 19.

"I make six or seven videos a week talking about football – analysis, tactics. I thought it was a good opportunity to put my money where my mouth is and see if I do know what I'm talking about, but also to learn."

Trials in early 2020 attracted over 100 hopefuls. The sec ond round of try-outs drew more than 400 applicants. Howson worked with Umbro to create a home and away kit to be worn by the players and sold on the club's website.

Howson aims to see the club – which began the Covid-disrupted season playing their home games at Droylsden's 3,000-capacity stadium – rise rapidly through the divisions and eventually participate in the FA Cup. Above all, though, his ambition is for Paddock to offer opportunities to children taking their first steps in the game and young players let go by professional clubs.

"There's a big opportunity to improve grassroots coaching," he says, outlining plans for Paddock to run as many as six teams in each youth age group. "I'd like that to be what Stretford Paddock stands for – very, very good coaching outside of the elite. If you've got young kids, you can't just take them to Manchester United and have them coached. So where do you take them? In Manchester, I want it to be Stretford Paddock.

"On the second-chance side of things, we've done brilliantly recruiting the players we've got. I see some of the names that are linked with our players – it isn't North West Counties teams, it isn't even non-league teams; it's Championship sides, League One sides. I'm under no illusions that these players will be gone very, very quickly, but I'm glad of that. I'm glad that we've given people the opportunity to be seen and to get back into the game again. I hope that's what the club ends up standing for."

One of the Stretford Paddock channel's presenters, Ronaldo Brown, has played a key role in recruiting some of the talented young players searching for a second chance in the game through the club. Brown – whose brother Rivaldo also plays for Paddock – was on the books at Liverpool and Oldham before quitting the game at 18 to study at Loughborough University and pursue a career in sports journalism. His contacts book has been a gold mine. 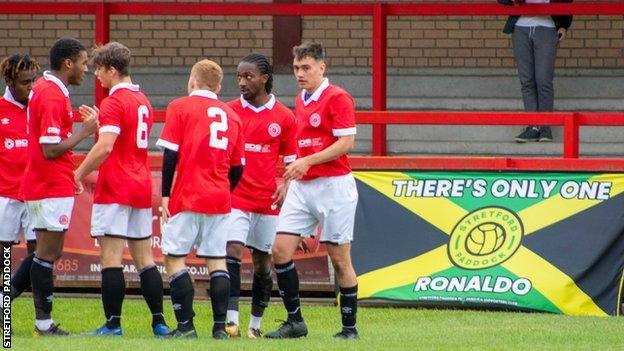 Forget Cristiano, there's only one Ronaldo who matters at Stretford Paddock

"The majority of my friends were academy footballers," he says. "The same way that I fell out of the game for a couple of years to study at Loughborough and Paddock gave me the opportunity to play football again, I have a couple of mates in the same position. They might have been at a club last year but now, with coronavirus, they're not. Or they might have needed a bit of fitness or the opportunity to get their names back out there."

Brown helped recruit winger Okera Simmonds, who played for Accrington Stanley last season, and striker Isaac Buckley-Ricketts, a gifted 23-year-old England youth international formerly of Manchester City. Both are hopeful of earning a shot at redemption in the professional ranks through their Paddock performances.

"I went to Paddock training and I kind of found my love for football again," adds Jay Phillips, another of Brown's friends. A silky central midfielder and Paddock's current top scorer, Londoner Phillips represented professional clubs at youth level and has played previously in the seventh-tier Isthmian League.

"In terms of the league, I've played at a higher level. But the whole standard of the club – the way we train, the way we play – it's only got higher since I arrived. We're winning games, scoring goals. I'd say it's more than possible for us to go higher season by season. One million per cent."

Despite the rapid rise Paddock continue to enjoy, Howson is aware of the stigma he and his club carry as a result of their fan TV roots. But he feels his channel and his team don't belong in the same category as the reactionary, engagement-baiting football YouTubers often derided online.

"Until a moniker appears for all the different types of fan channels," he reasons, "we're all going to get tarred with the same brush, but I reject that notion. Last week, we had Rio Ferdinand, [former Manchester United coach] Rene Meulensteen and [journalist] Henry Winter on. We're not doing this for over-the-top reactions. We're doing this for intelligent content people can enjoy. It's very easy to go live and start losing your head and start shouting at stuff. But I want to be proud of what we create, and I think we create high-quality content." 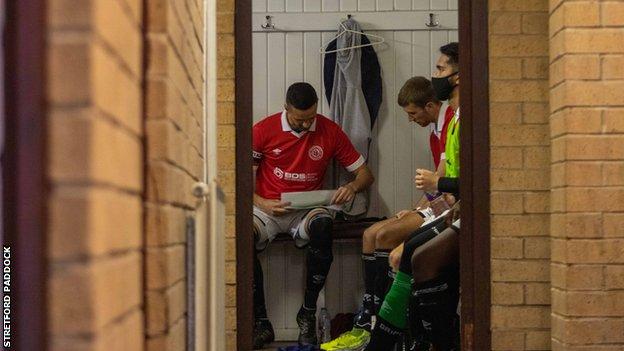 When play was suspended in December, Paddock were one point behind leaders Moston Brook, over whom they had two games in hand. A pandemic reshuffle means their league will not be completed, instead replaced by a cup competition which will include teams from the tier above. Promotion hopes might have to be shelved until next season.

Despite any potential delay, though, the upstart YouTube side's grand plans are on track. A four-year deal with a major sportswear brand has been agreed and another former England youth international, ex-Stoke City defender Ash Kigbu, has been signed.

"This isn't a frivolous project," Howson concluded in the latest episode of the club's self-produced series. "We're here to compete.

"Stretford Paddock is here to stay."