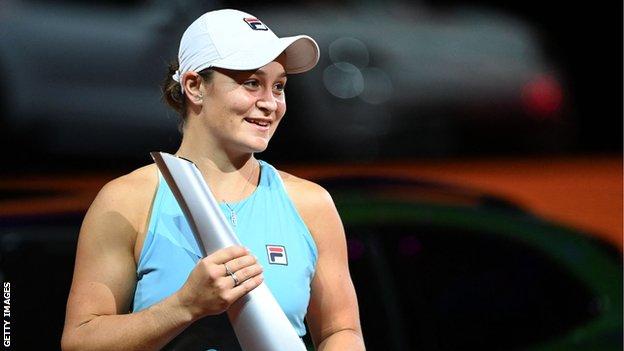 World number one Ashleigh Barty beat Aryna Sabalenka in the final of the Stuttgart Open to clinch her third WTA title of 2021.

The 25-year-old Australian fought back from a set down for the third time in as many matches in Germany to beat fifth seed Sabalenka 3-6 6-0 6-3.

Barty took 23 minutes to win the second set and, while she was broken at 3-1 in the third, she was not to be denied.

The title is just her second on clay after winning the 2019 French Open.

Sabalenka, 22, made Barty work in the deciding set despite the Belarusian playing with strapping on her right leg after needing a medical time out after the second set.

Barty's clay-court triumph in Germany follows title wins on the hard courts of the Miami Open and Yarra Valley Classic.

"Get healthy, get well – you'll be back in no time," Barty said to Sabalenka at the end of what she called an "incredible week".

Barty's campaign in Stuttgart is not yet over as she teams up with American Jennifer Brady, of the USA, for the doubles final against Desirae Krawczyk and Bethanie Mattek-Sands, both also of USA.

Cirstea, ranked 67 in the world, won her maiden title at Tashkent in 2008.