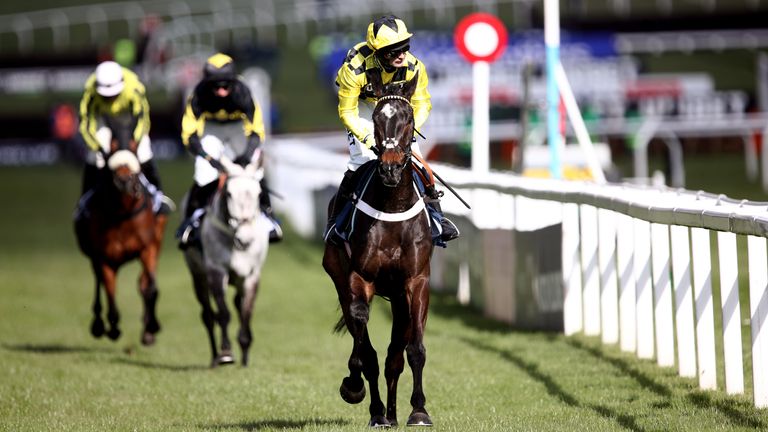 Shishkin justified his prohibitive odds when taking his winning streak to seven with an easy victory in the Sporting Life Arkle Challenge Trophy at Cheltenham.

Winner of the Supreme Novices’ Hurdle on this card 12 months ago, Shishkin is now unbeaten in four races over fences as he gave trainer Nicky Henderson a seventh Arkle – a race the Seven Barrows trainer has taken with stars such as Sprinter Sacre and Altior.

The 4-9 favourite was always travelling well in the hands of Nico de Boinville, as Allmankind and Captain Guinness made it a true-run race over the two miles.

Shishkin joined the two leaders at the third-last fence, setting sail for home and going on to score by 12 lengths.

Eldorado Allen picked up the pieces for second place close home, just ahead of Captain Guinness and Allmankind.

Shishkin was given a quote of 5-2 for next year’s Queen Mother Champion Chase with Coral and William Hill, while Paddy Power went 6-4.

Henderson said: “We’d always hoped (to win like that), but you never expect. It was strange, it will be all week without the crowds, but it doesn’t make it any easier watching them. Winners here are winners tough and without the crowd they are still special.

“We knew there was going to be plenty of pace, I didn’t know the other horse (Captain Guinness) would take him (Allmankind) on as well. But he’s got a high cruising speed and just sat on their tails.

“He came wide and had plenty of space, but he was impressive the way he came up the hill.

“We’ve had great days here in this race, Sprinter Sacre, then Altior followed him and it’s a shame he’s missing this week, but it’s extraordinary to find another. He looked as good as the other two did in this race today. He’s got a long way to go to match them, but you had to be delighted with what he did today.

“It was a different challenge today. We schooled on Thursday and he nearly hurdles his fences, he’s very quick which frightens you a little. He’s very fast, he’s always looked like a chaser but he’s definitely a two-miler, he’s just a natural.”

He added: “Yesterday was a horrible day (having to rule Altior out of the Champion Chase), the second year running. For the Pughs (owners) it was tragic, having to make that call was no fun at all and you worry about the week starting that way.

“We always say we’d settle for one and it’s nice we’ve got one on the board. I don’t know if we can enjoy it, but we can box on.

“Altior has a bacterial infection, he can’t give that to anybody, hopefully we can clear it up. In time for Aintree I don’t know, but he’ll easily be ready for the Celebration Chase. Sandown is probably the likeliest.

“Whether Shishkin runs again, I don’t know, but why not? That was only his fourth run over fences. That was the first big question he was asked and when you see an answer like that you think why not. Aintree is the only option, but it is a short break this year.”