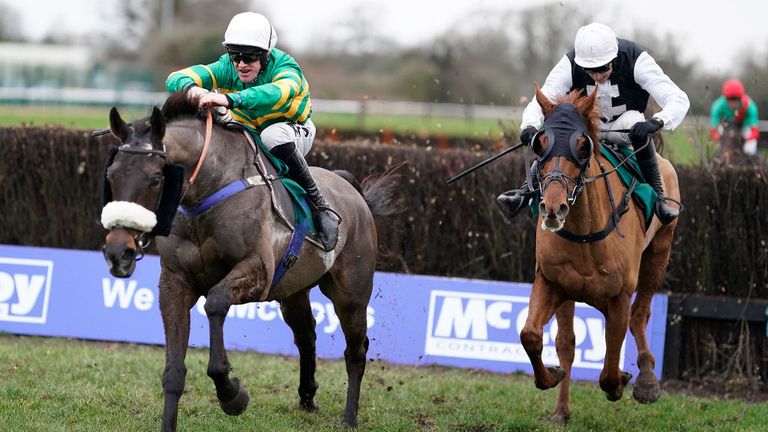 Anita Chambers previews Sunday’s meetings in the UK and Ireland with her best bet running at Carlisle.

Captain Chaos can highlight a Carlisle double for Dan and Harry Skelton in the Aglionby Veterans’ Handicap Chase.

The Skelton team did not hit the hoped-for heights at the Cheltenham Festival – with Nube Negra just missing out in the Champion Chase, while the likes of Allmankind and Shan Blue fell short of the required level, but a Cumbrian double can provide a modicum of consolation.

Captain Chaos arrives on the back of a gutsy success at Ascot last month, when he fended off the challenge of the admirable Regal Encore to take Listed honours by a neck.

The 10-year-old benefited from a canny ride on that occasion, with Harry Skelton making full use of his proven stamina and a light weight to launch an early bid for home after racing prominently throughout.

Those tactics paid off – and while Captain Chaos must contend with a 5lb rise now, his mark of 140 is still 2lb lower than his rating at the start of the campaign, and this is not as competitive event as Ascot on the face of it.

Seven No Trumps can make it third time lucky in the Every Race Live On RacingTV Maiden Hurdle.

The six-year-old has been comprehensively beaten in finishing third and fourth on two starts to date, but he clearly has some ability and just lacked the toe of those in front of him both times so far.

He should be starting to get the hang of things now, and can get off the mark.

One For Rosie hacked up on his debut over fences, and should follow up in the racingtv.com Novices’ Chase.

A 145-rated hurdler and placed in Grade One company when trained by Nigel Twiston-Davies, One For Rosie is now in the care of Kim Bailey and looked an exciting prospect on his first start for the yard at Leicester.

Returning from 418 days on the sidelines, One For Rosie turned in a good round of jumping at the first attempt and came home 20 lengths clear.

She won over this sort of trip twice at the start of her campaign – but after 76 days out of action, Philip Hobbs decided to switch her back on her return at this track last month.

Outpaced in the closing stages, she had to settle for third, but that should have put her spot on for this test.

Vegas Blue is worth one last chance in the BioWaveGO Wave Goodbye To Pain Mares’ Handicap Hurdle.

She looked promising when winning at Huntingdon in fine style on her seasonal return back in October, but it was downhill from there with two disappointing subsequent runs before she suffered an unfortunate fall in a jumpers’ bumper last time.

Pozo Emery let down favourite backers on his latest outing when he found two miles at Wincanton far too much of a speed test for his liking.

Beaten two lengths in second, Pozo Emery still ran well enough, and the extended two-mile-three-furlong distance of the Coming Soon BioWaveGO International Novices’ Hurdle can revive his fortunes – particularly given he was a course-and-distance winner in January.

The Flat turf season kicks off in Ireland, and Casanova can star on the opening card at the Curragh.

He contests the Paddy Power Irish Lincolnshire for Adrian McGuinness, following a fair third on his debut for the yard at Dundalk back in January.

Previously trained by John Gosden, the five-year-old has a blue-chip pedigree as a son of the great Frankel out of Karen’s Caper, a Group One placed runner for Gosden with a couple of black-type performers among her progeny.

Casanova was shipped out of Gosden’s for 15,000 guineas last autumn, having missed the entire 2020 season but won two of his eight outings, showing some useful snippets of form, for his previous handler.

He was a bit keen on his debut for McGuinness, racing over seven furlongs and staying on all the way to the line to suggest this move back up to a mile will be in his favour, while a mark of 92 is high enough but not beyond his capabilities.