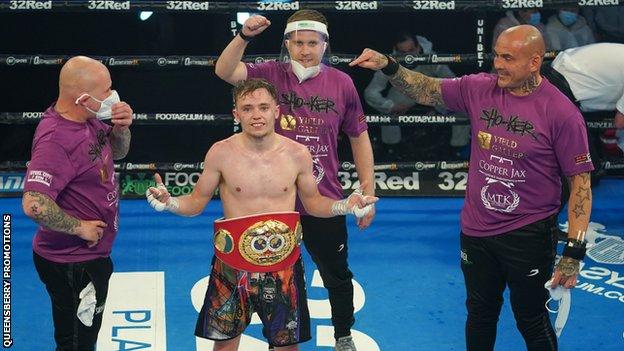 Edwards has 16 wins from 16 fights as a professional

The British fighter served up 36 minutes of energy and movement to avoid the heavy handed South African.

Edwards follows his brother Charlie in becoming a world champion, making them only the second pair of brothers from the UK to win world titles.

"It might not be pretty or exciting all the time but I am hard to beat," said 25-year-old Edwards, who was an underdog going into his first world title fight.

"I've been saying it the whole way through. It was a quiet build-up. We were friends before, I hope we're still friends now.

"He was good at closing the gap down. I felt I deserved to win. Their corner said I had won. I'm over the moon."

Promoter Frank Warren called Edwards' display a "masterclass" and said the great Floyd Mayweather – who preaches the art of hitting and not getting hit – would have appreciated a "great performance". 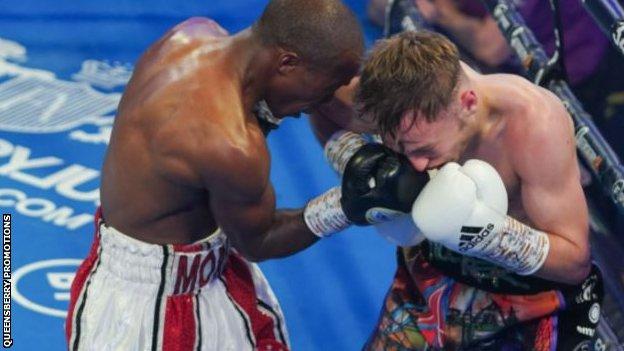 When Mthalane did get close, Edwards moved to ensure only single shots could land

Mthalane had twice held world champion status during over two decades as a professional and Edwards told the 5 Live Boxing podcast earlier in the week that he would hit and move against a 38-year-old rival who had previously lost just twice in 41 outings.

He delivered on the plan in spades and by halfway it seemed clear he would follow brother Charlie – a former WBC champion at the same weight – in becoming a world champion, a feat only Liverpudlian fighters Liam and Callum Smith had previously achieved in British boxing.

From the off Edwards circled Mthalane and maintained his distance. He landed sufficient volume of punches to not only clearly take rounds but to prevent his rival from getting close enough to fire home anything meaningful.

When Mthalane did land, Edwards' movement ensured only single shots could get home but more often that not it was the Briton flicking home a variety of blows while switching from the southpaw to orthodox stance effortlessly.