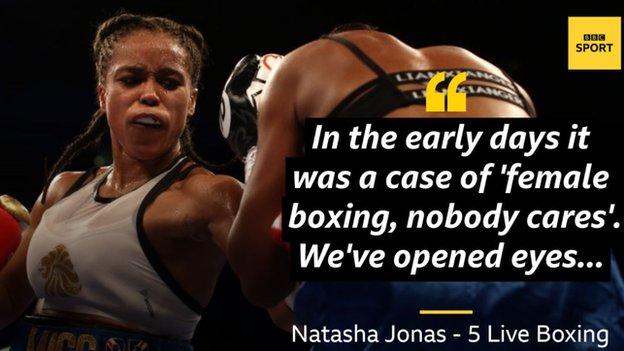 Natasha Jonas has one defeat in 11 outings as a professional

Natasha Jonas says women's boxing must make the most of its momentum – with fans calling for her world title bout with Katie Taylor to top a fight card.

Jonas challenges Taylor for all four of her lightweight belts on the undercard of Saturday's bill – topped by Derek Chisora's bout against Joseph Parker.

"When this card was announced, people were asking why we aren't topping the bill," Jonas, 36, told 5 Live Boxing.

"In the early days it was a case of 'female boxing, nobody cares'."

The fight, at the Manchester Arena, will be broadcast by BBC Radio 5 Live

Taylor v Jonas and Eubank returnsWatch: When Taylor and Jonas foughtRuiz on his 55lbs weight loss

'Visibility is the key'

England's Jonas was beaten by Ireland's Taylor in the lightweight quarter-finals when women's boxing made its debut at the Olympic Games at London 2012.

Jonas then retired from boxing and had a daughter, but was then inspired to return.

Taylor, meanwhile, has been at the forefront of a growth in popularity for women's professional boxing, winning world titles in two weight divisions and earning all four belts to stand as undisputed champion at lightweight.

The Irish fighter, from Bray, told 5 Live Boxing: "I was dreaming of being Olympic champion as a 10-year-old when women's boxing wasn't an Olympic sport or even allowed in Ireland.

"Here we are. Women's boxing has come along so much and it's because of this generation of fighters who have broken down the barriers."

Taylor, 34, says women's boxing has "sky rocketed" in profile and popularity during the Covid-19 pandemic.

Other fighters have been more cautious, though, with Scotland's Heather Rankin suggesting that women's bouts are getting more promotion as a way of cutting costs during the coronavirus pandemic.

Rankin said that women's fights are cheaper to put on,external-link because female fighters are paid less than the men.

Liverpool's Jonas says "no female" is asking for "equal pay" but that the structures should be "fair".

She wants boxing to capitalise on what she calls a "Eureka moment" for the women's sport.

"The opportunity after 2012 wasn't great for female boxing and it wasn't something I could sustain as a job," Jonas added.

"I went away and had a child. I thought I was done with boxing and would be walking away from the sport forever. The opportunity came to be professional after it had grown bigger.

"Visibility in any sport is the key. We are progressing but when MMA cards are being headlined by Ronda Rousey, Amanda Nunes and Holly Holm, nobody questions it because of the way it is run. We need women's boxing on par with that.

"UFC and MMA have shown us there is a market there. It's about marketing, promoting and selling the product to the consumers."

Taylor – unbeaten in 17 professional fights – has at times looked untouchable but Jonas' pedigree suggests the Manchester Arena bout will be an excellent contest.

"I think we are both completely different fighters to when we fought nine years ago," added Taylor.

"In her last few fights, she's shown the best Natasha Jonas and that she deserves to be on this stage.

"It's going to be a fantastic fight and I hope it will be a show stealer."