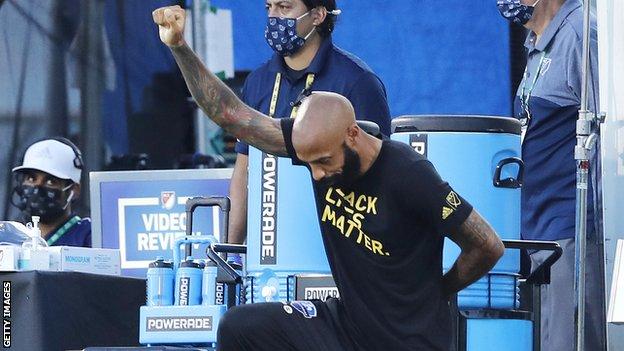 Former Arsenal and France striker Thierry Henry says he is removing himself from social media because of racism and bullying across platforms.

Henry, 43, posted a message to his 2.3m followers on Twitterexternal-link on Friday saying the problem was "too toxic to ignore".

He said he would not return to social media until companies "regulate their platforms with the same vigour and ferocity that they currently do when you infringe copyright".

"It is far too easy to create an account, use it to bully and harass without consequence and still remain anonymous," wrote the Frenchman.

"The sheer volume of racism, bullying and resulting mental torture to individuals is too toxic to ignore."

Henry won two Premier League titles with Arsenal, where he played between 1999 and 2007.

Last September, he detailed instances of racismexternal-link he experienced dur ing his playing career with Arsenal and France.

"We need to make people aware that we are in pain," said Henry. "Enough is enough. You fast forward and we're still in the same situation."

In Friday's message, Henry added: "From tomorrow morning, I will be removing myself from social media until the people in power are able to regulate their platforms with the same vigour and ferocity that they currently do when you infringe copyright.

"Until this changes, I will be disabling my accounts across all social platforms. I'm hoping this happens soon."

Social media companies have insisted they are working to tackle the problem but Culture Secretary Oliver Dowden said on Twitter they "must do more".

Twitter has said it is "committed to Kick It Out's initiative to tackle online hate, and look forward to continuing these discussions and developing solutions with our partners in football".

Instagram, which is owned by Facebook, said it took action on 6.6 million pieces of hate speech between October and December last year and will "take tougher action when we become of aware of people breaking our rules in DMs [direct messages]".

"We'll continue this work, and know these problems are bigger than us, so are working with others to collectively drive societal change through action and education."