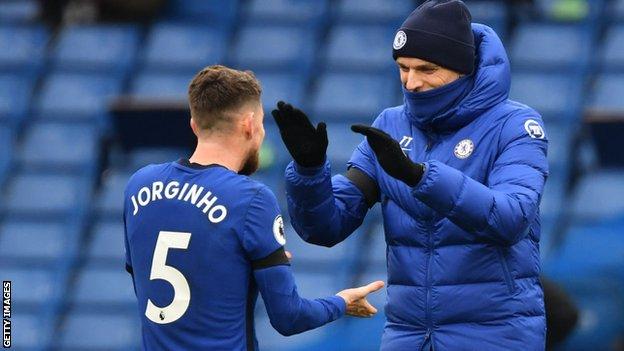 Renowned as a tactical mastermind, Thomas Tuchel has impressed players with his man-management

Thomas Tuchel has restored confidence and equanimity to a Chelsea squad which became fractured under Frank Lampard – and he has done so by giving everyone a chance.

The German has made 39 changes to his starting line-up in the 10 Premier League games since he took over in January, with senior internationals brought in from the cold to battle it out with the club's academy graduates and the products of last summer's £220m outlay.

It has led to a cautious transition, with 12 games unbeaten in all competitions and only two goals conceded.

But as the team approaches the business end of the season, starting with the second leg of their last-16 Champions League tie against Atletico Madrid on Wednesday, could it be time for the former Paris St-Germain boss to narrow in on his best team in the search for more goals?

Switching to three centre-backs has clearly tightened up the defence, yet scoring has proven more difficult with a drop to 1.1 goals on average per game compared to 2.1 under Lampard.

As former Chelsea left-back Graeme le Saux tells BBC Sport: "If you're only scoring one goal a game, it is a very small margin of error if you concede, and over time that will put a strain on the defence if you're not taking more of your chances."

It's an issue which might prove crucial if the club has plans to win the Champions League.

And it is perhaps one of the reasons why the club has been linked with prolific Borussia Dortmund striker Erling Braut Haaland, although Tuchel said on Saturday there was "no need now" to reflect on summer transfer targets.

So how does Tuchel find the best solution without disturbing the club's current equilibrium? 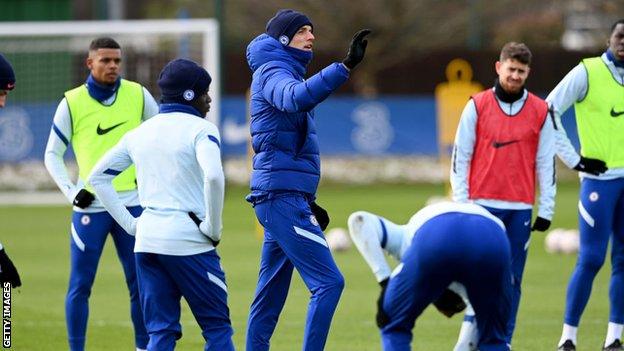 Tuchel said: "Everybody is hungry, very positive in training and we don't want to lose this spirit because it can bring us a long way."

Smaller balls and communication skills – how Tuchel turned it around

Chelsea managers tend to do well when they first arrive at the club. When it comes to unbeaten records held by new Premier League managers, four of the top six have been employed at Stamford Bridge.

If Tuchel avoids defeat in the next three league matches against West Brom, Crystal Palace and Brighton, he will overtake Maurizio Sarri's record of 12 games unbeaten.

The 47-year-old has achieved that by immediately restoring harmony and hunger to the squad, with experienced defenders Marcos Alonso and Antonio Rudiger, who almost joined Paris St Germain or Tottenham last September, coming back into the side.

Sources close to the club have praised Tuchel's communication skills, with the German ensuring he speaks to the whole squad individually. No doubt his native tongue has helped in dealing with the likes of newcomers Kai Havertz and Timo Werner.

And he has kept the players on their toes and lightened the mood in training with a wider range of drills, including mini footballs or using hands instead of feet in some games.

"He has simplified the relationship he has with the players," says Le Saux, who made 312 Chelsea appearances. "He's restored a sense of consistency and methodology to the way he is doing things.

"He's emotionally intelligent, and knows when to confront or comfort players, and has built trust.

"The best example was with Callum Hudson-Odoi when he brought him on and then took him off 31 minutes later against Southampton. He admitted that he had been harsh on him in the post-match interview, and then restored the relationship by starting him in the next game.

"That doesn't just have an impact on the player involved, but sends a signal to the rest of the squad. He can draw on his experience of handling top-level players, which is not a criticism of Frank, but something he did not have the experience of as a coach."

It has led to a feeling where the players are leaving the club's Cobham training ground all thinking they could be starting the following matchday. 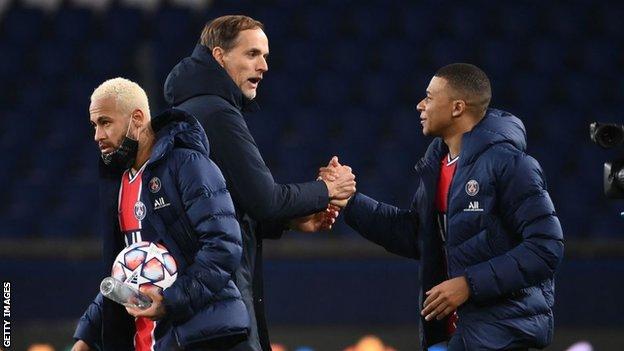 Making Chelsea harder to beat also speaks of the coaching experience held by the former Mainz and Borussia Dortmund manager.

Ten clean sheets in 12 games has taken Chelsea to fourth in the Premier League, the quarter-finals of the FA Cup and a 1-0 win in the first leg of their last-16 tie against Atletico Madrid.

Defensive solidity and changing the team regularly has kept attacking players on board, but has it enabled them to build partnerships?

In many ways Chelsea have an embarrassment of riches. In addition to Havertz, Werner and Olivier Giroud, they can also call upon Mason Mount, arguably the team's best player this season, Christian Pulisic, Hakim Ziyech and Hudson-Odoi to compete for the front four or even three positions, if the team plays with wing-backs.

Chelsea without Jorginho and Mount for Atletico tie

Statistics show Tuchel's side are taking as many shots as Lampard's side per game (13.8 v 13.9), but are creating fewer chances where they would be expected to score, so it is perhaps the final pass or touch that is missing.

"Goals is an obvious area he needs to address next, but I don't know if Tuchel can do that in season because there is very little time to coach between so many games," Le Saux says.

He said on the Monday Night Club: "It's different for strikers. It's really important to get into a rhythm so going in for one game and sitting out for two is not helpful. They haven't scored enough goals, and being a centre forward is all about feeling and confidence."

When BBC Sport asked Tuchel whether a run of games might help his forwards score, he said: "Maybe, and then it's clearly my fault and I take responsibility for changing the team.

"But at the same time, if you arrive in elite-level football and if you play for Chelsea there is no time to get four or five or six matches in a row, until you can score regularly.

"We need to be more precise, we need to focus better on our decision making and on our technique. Our strikers are very aware of that and they ask the highest demands of themselves so we are not pointing fingers at anybody. But we can clearly improve the situation."

After a positive start, Tuchel is already facing a tricky situation where it seems only goals can break the cycle.

Why are Britons the fattest in Western Europe?: BBC Food looks at the UK's problem with obesityLine of Duty Series 6 is coming: Get ready with the brand new trailer
Source

Man Utd boss Ole Gunnar Solskjaer on Son Heung-min: ‘If that was my son he doesn’t get food’