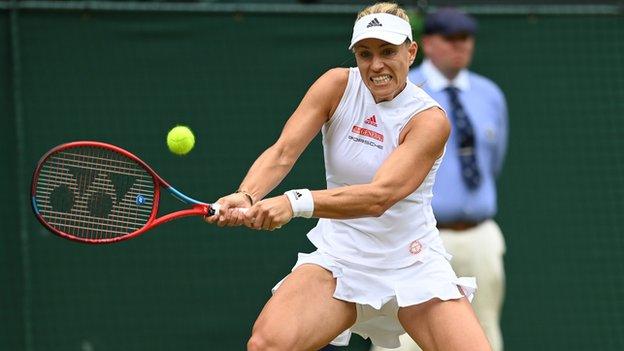 Kerber was beaten in the Wimbledon semi-finals by Ashleigh Barty

Angelique Kerber is the latest tennis player to pull out of this summer's Olympic Games in Tokyo.

The 33-year-old German wrote on Instagram that her body "needs rest" after an "intense few weeks", that included reaching the women's semi-finals of Wimbledon.

The Olympics start on 23 July.

Three-time Grand Slam winner Kerber said participating in the women's singles event at Tokyo had been a "constant motivation" for her to keep pushing throughout the season.

She added: "Representing Germany in London 2012 and Rio 2016 as part of the German team has always been one of my favourite memories of my career so far.

"This makes it even more disappointing for me to accept the fact that my body needs rest after the intense few weeks that lie behind me and that I have to recover first before returning to competition later this summer!.

"Thank you for your support, as this has been a very difficult decision for me. Good luck to all my fellow German athletes in Tokyo #TeamDeutschland, I will miss you."

Both Evans, 31, and 30-year-old Konta withdrew from the Olympics earlier this week after the pair tested positive for Covid-19.

Jamie Murray, who has competed in Beijing, London and Rio for Team GB, will replace Evans as Neal Skupski's partner in the men's doubles competition.

Swiss legend Federer, 39, has suffered a setback with an existing knee injury.

The tennis tournament at the Olympic Games begins 24 July.