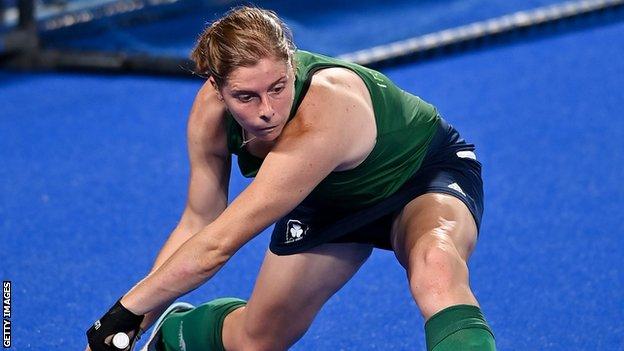 Captain Katie Mullan believes Ireland's participation at the recent European Championships was a "blessing" in priming the squad for an intense Olympic schedule in the Tokyo heat.

Sean Dancer's side will play five times in eight days, starting with Saturday's Group A opener against South Africa.

But Mullan feels the squad are in great shape after three Euros outings in the space of five days in June.

"We had some really intense back-to-back games over there," she said.

"So I have confidence that we're physically in the best shape we've ever been in. We've given ourselves the best chance to fit that schedule that's been put in front of us, but everybody's in the same boat."

Mullan added: "You see the other nations, none of them have had the perfect preparation.

"None of them have had this heat exposure because of Covid and they haven't been able to travel, so it's a level-playing field – that's the way we're viewing it."

Prior to leaving for Japan, Ireland worked hard to prepare themselves for competing in draining conditions with sessions in the heat chamber and saunas at the team's Jordanstown training site.

Mullan says the players have found each day "a little bit easier" since landing in Tokyo as they continue to acclimatise themselves to the Japanese summer before a testing campaign which pits them against world and European champions the Netherlands (who also won gold at the 2008 and 2012 Games), Germany, India and 2016 gold medallists Great Britain in addition to South Africa.

This week, of course, marks the culmination of a 20-month journey which began with Ireland securing their place at the Games with a highly dramatic shootout win over Canada at Donnybrook in November 2019.

And now that the Olympics are finally here, Mullan admits she "cannot wait" for Saturday to get Ireland's quest for a medal up and running.

"It's just such a special moment for our team," said the 27-year-old.

"But at the end of the way, when we cross the white line it's a game of hockey and that's the way we have to view it.

"It's so exciting that it's finally here. We've had to wait an extra 12 months but we're absolutely buzzing.

"That first game is a target game for us, so it's important we get a result on Saturday so now we're just focusing on the gameplan and preparing the best we can.

"I think the experience we've had at major tournaments in the past will stand to us come Saturday."