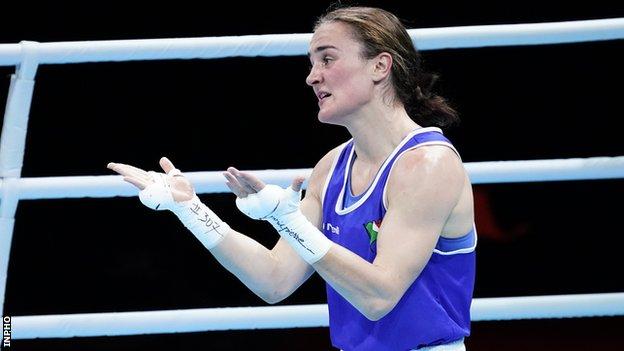 Kellie Harrington has qualified for her first Olympic Games in July

The win will give number two seed and 2018 world champion Harrington a more favourable seeding for July's Games.

Harrington, a European Games silver medallist who is currently ranked world number six, will be making her first appearance at an Olympics.

The Irish boxer had booked her place at the rescheduled Tokyo Games by winning her quarter-final on Sunday and followed that up with a unanimous points victory over Esra Yildiz of Turkey on Monday.

She defeated 20-year-old Londoner Dubois on a 4-1 decision on Tuesday.

Another Irish fighter, Michaela Walsh, will go for gold against Italy's Irma Testa at featherweight at 17:00 BST on Tuesday.