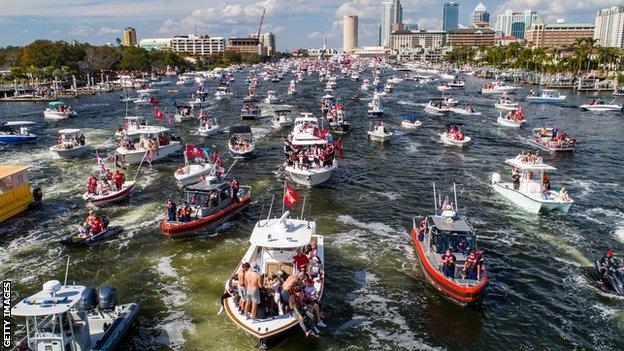 A number of boats joined the Tampa Bay Buccaneers players and staff on a victory parade along the Hillsborough River.

Throwing one of the most famous trophies in world sport over some water would be considered too risky for most of us – but not if you are the NFL 'GOAT'.

Superstar quarterback Tom Brady celebrated his record-extending seventh Super Bowl success by hurling the Vince Lombardi Trophy from one boat to another during the Tampa Bay Buccaneers' victory boat parade along the Hillsborough River.

Brady's daughter Vivi clearly had little faith in her father's throwing abilities as she could be heard shouting "dad, no!" as he prepared to throw the trophy.

Thankfully for the Bradys, and probably some nervous NFL executives, team-mate Cameron Brate was able to take the catch.

Was it ever in any doubt?

"That was the best catch of my life," Brate told the Tampa Bay Times. "Unbelievable. If I had dropped that? I think I would've had to retire."

Thousands of fans lined the Hillsborough River to join in the celebrations, with most respecting mayor Jane Castor's request to wear masks and maintain social distancing in order to limit the spread of Covid-19.

Boats joining in the parade were also asked to keep at least 50 feet from vessels carrying players and other members of the franchise because of the pandemic.

Tampa Bay beat the Kansas City Chiefs 31-9 in their own stadium on Sunday to win the Super Bowl for just the second time.

They were inspired by the legendary Brady, who at 43 years and 188 days became the oldest player to play in the biggest game in US sport and extended his Super Bowl appearances record to 10.

Is this the 'NFL GOAT's' greatest achievement?How the Weeknd shook up the Super Bowl half-time show

The Six Nations is back: Rugby Union Weekly unpacks Scotland's Calcutta Cup triumph and other talking pointsTeach Me A Lesson: Greg James and Bella Mackie ask what we might have missed in school
Source

Super Bowl 2020: Vince Lombardi, the story behind the name on NFL’s biggest prize

NFL: The Miami Dolphins team of ‘misfits’ who won the Super Bowl undefeated