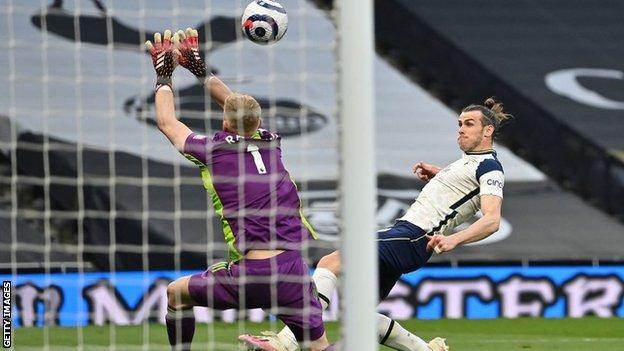 Gareth Bale's hat-trick gave Tottenham a comfortable victory over relegated Sheffield United as they maintained their pursuit of European football.

Bale flicked in the opener when it was lifted over the top by Serge Aurier before the right-back teed him up to thump in the third in the second half.

The Welsh international was played in by Son Heung-min on the break for his second – a thumping strike which flew into the top right corner.

Son rounded off a dominant Spurs performance when he curled in a superb fourth goal.

The South Korean also had a goal disallowed for offside five minutes into the second half.

"You have to take your chances when they come," he said. "I just needed to play games and get a run of games and I'm doing that now. I'm happy and when I'm happy I play well."

Spurs interim head coach Ryan Mason added: "I said all along Bale hasn't and won't lose that ability in the final third to produce moments of excellence. He's a world class player – he's proved that over many years.

"The most pleasing thing was his attitude; his running for the team. You feel confident he'll take the chances."

Sheffield United, who were relegated on 17 April following defeat to Wolves, had one shot on target and were unable to test goalkeeper Hugo Lloris. 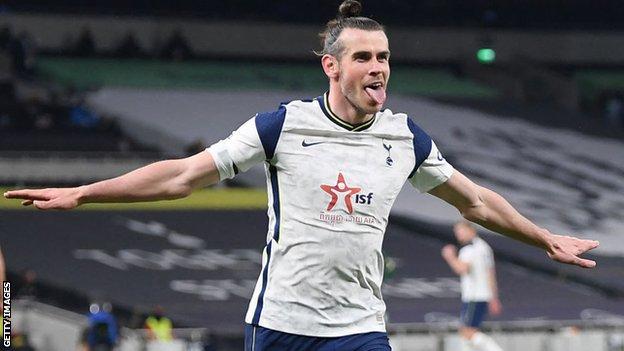 Bale's hat-trick was only his second in the Premier League and his first since December 2012 when he netted three against Aston Villa.

He was one of two changes to the Spurs starting line-up as interim manager Mason called up Bale and Dele Alli in place of Harry Winks and Lucas Moura.

Both gave good accounts of themselves – Alli showing sparkles of quality in the first half before fading in the second.

But it was Bale who stole the show, making a smart run in behind to poke in the opener before lashing in a powerful second after a swift break from Son down the right.

Aurier's pass for Bale's third was perfectly-weighted too and the Welshman drilled it into the bottom right corner to seal the hat-trick.

He celebrated at full-time with a beaming smile as he collected the match ball and he notched up another milestone by becoming the sixth Welshman to surpass 50 Premier League goals.

Bale returned to Spurs on a season-long loan from Real Madrid in September and when asked if he will extend his stay, Mason said: "I think that is a discussion once the season is done. Our priority is the next game." 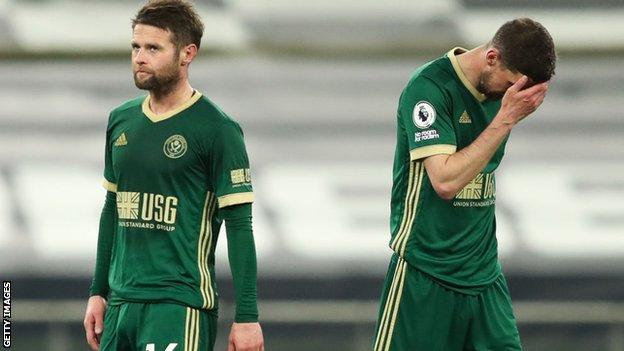 Sheffield United only conceded four or more goals in one Premier League game under Chris Wilder. They have done so twice under Paul Heckingbottom

Attention has already turned to next season for Sheffield United with relegation to the Championship confirmed a few weeks ago.

They were boosted by the return of Norwegian international Sander Berge, who came on as a substitute at half-time and helped the Blades find some balance in midfield.

John Fleck pushed up into a more advanced position and saw lots of the ball, but in truth, Sheffield United never showed enough firepower to get anything from the game.

David McGoldrick and Oliver Burke got in behind the defence on a few occasions but lacked the support needed to create any chances, while Sheffield United's first and only shot on target came in the 65th minute when Oliver Norwood struck it straight at Lloris.

The defeat means interim manager Paul Heckingbottom has seen his Sheffield United side concede 15 goals in his six Premier League games in charge.

'Some of our play was outstanding' – what they said

Tottenham interim head coach Ryan Mason: "The attitude, the desire to compete and to keep competing over 95 minutes [was good]. We had some real moments of quality but the bravery to play in every duel, every action, is the most pleasing thing.

"We had a week where we could train and work on the players. We defended strongly as a team. Some of our play was absolutely outstanding."

"That is not a performance that we want to see. It was so passive and I can't wait until the fans are back in because in a stadium like this it's absolutely dead. We tried to generate our own atmosphere in the second half but the game ran away from us."

Bale feels at home – the best of the stats

Tottenham travel to Elland Road to face Leeds on Saturday, 8 May (12:30 BST kick-off), while Sheffield United are at home to Crystal Palace on the same day (15:00 BST).