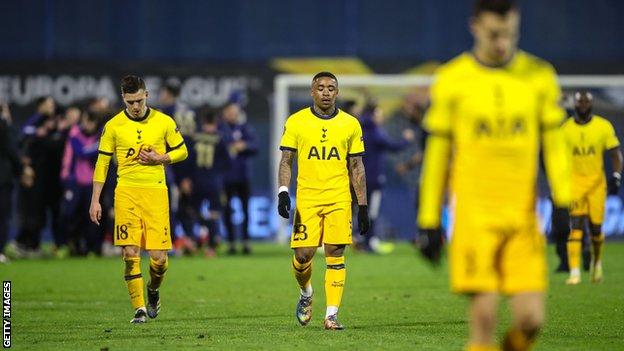 Tottenham are eighth in the Premier League and out of Europe. Next month's League Cup final could be the only chance to salvage something from their season.

Jose Mourinho apologised to the Tottenham fans and said his players failed "at the basics of life" after they threw away a 2-0 lead to be knocked out of the Europa League by Dinamo Zagreb.

A second-leg display described as "diabolical" and "a disaster" by their ex-player and manager Glenn Hoddle saw Spurs eliminated in the last 16 in Croatia after extra time.

A hat-trick from Mislav Orsic did the damage, reversing the comfortable lead Mourinho's side had built in last week's first leg, prompting Spurs goalkeeper Hugo Lloris to call the performance a "disgrace".

"They [Dinamo] left sweat, energy, blood. In the end they left even tears of happiness," Mourinho told BT Sport. "They were very humble and committed. I have to praise them.

"On the other side, my team – I repeat, my team – didn't look like it was playing an important match. If for any one of them it is not important, for me it is.

"I am disappointed for a difference of attitude of one team to another. I feel sorry that my team is the team that didn't bring to the game not just the basics of football but the basics of life, which is to respect our jobs and to give everything.

"I can only apologise to the Tottenham supporters. I hope they feel the same way I feel. Today is live or die – and in this moment, we die."

Resting on their 2-0 first-leg lead, Tottenham looked relatively comfortable for just over an hour in Zagreb, until Orsic's first goal began to swing the tie away from them.

He levelled the tie with eight minutes of normal time left and then won it for his side early in the second period of extra time.

Tottenham forced two good saves from home goalkeeper Dominik Livakovic late in the game but it was too little, too late.

"For the respect I have for my career and my job, every match is important," Mourinho said. "For every Tottenham fan at home, every match matters. Another attitude is needed. What I feel is much more than sadness.

"I just left the Dinamo dressing room where I went to praise the guys and I feel sorry it is not my team who won the game based on attitude and compromise. I feel more than sad.

"Football is not just about players who think they have more quality than others. The basis of football is attitude. They beat us on that."

France's World Cup-winning goalkeeper Lloris gave a brutally honest assessment of his team's performance and an insight into the issues troubling the club.

"It's a disgrace," he told BT Sport. "I hope everyone in the changing room feels responsible. The taste of the defeat is more than painful and we are all responsible.

"We are a club full of ambition but the team at the moment is a reflection of what is going on in the club. Lack of basics, lack of fundamentals. Mentally we should be stronger, more competitive.

"At this level, when you are not ready, you pay – and if you don't respect the opponent, it's punished. The blame is on all the team, all the club. We are guilty.

"The way we play is just not enough. One thing is to come in front of the camera and say 'I'm ambitious'. The other is to show it every day. To behave as a team is the most difficult thing in football.

"If you follow the team only when you are in the starting XI, that can be a big problem and today is the consequence of that.

"We had great moments in the past because we could trust the togetherness in the team. Today I am not sure about that." 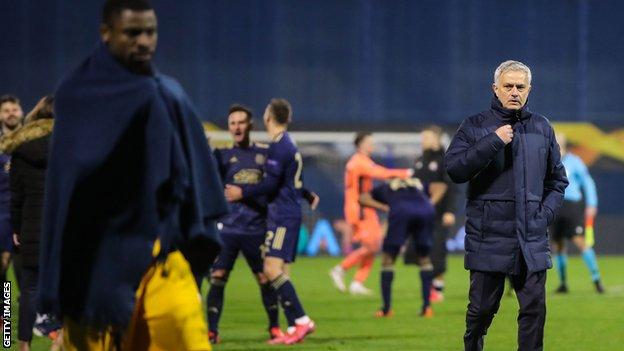 Tottenham have failed to keep a clean sheet in 13 of their last 14 away games in the Europa League, including conceding in all five such games under Jose Mourinho.

'They lost the plot and also lost their heart'

Former Tottenham player and manager Glenn Hoddle, working on the match as a pundit for BT Sport, was scathing in his assessment.

"Mentally, they have got it wrong right through the game," he said. "I said beforehand that if Zagreb scored I was expecting a reaction. That was Spurs' chance to respond but they went backwards.

"They went downhill instead of fighting. They should have upped the gears but they didn't.

"There is not enough quality in the team. Everyone was looking at each other. When that happens, it is a disaster for a team.

"There was no-one on the night who said they were going to take responsibility and change the game. You need leadership but they were just looking at each other.

"They lost the plot but they also lost their heart."

Their former striker Peter Crouch, sitting alongside Hoddle, was no less critical.

"They haven't turned up in two games now," he said, also referring to Sunday's Premier League defeat by Arsenal.

"You talk about seeing a reaction when you go a goal down but we saw players hiding. Simple passes not being made, no creativity.

"The keeper made some good saves but Zagreb were the better side and deserved to go through. You wonder where Spurs' season is going now."

'The season is hanging by a thread' 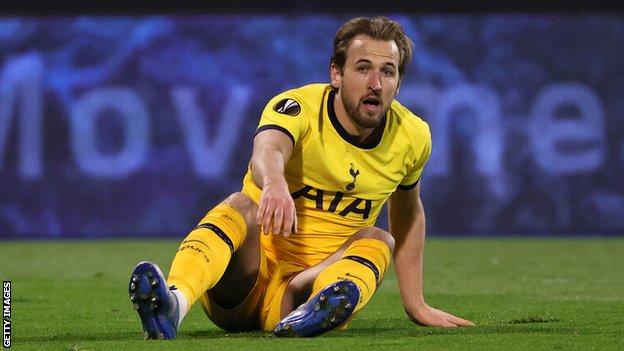 So where is Tottenham's season going?

They are still in the race to secure a top-four Premier League finish and qualify for next season's Champions League, but with a six-point gap between themselves in eighth and fourth-placed Chelsea, they can afford few further mistakes.

They also have the Carabao Cup final to come in April but will start as outsiders to Pep Guardiola's in-form league leaders Manchester City.

"The club are at a crossroads this season," said Hoddle. "Yes they could beat Manchester City in the League Cup final but you just can't switch it on at Wembley in a cup final. It would save the season but if they don't, where is this season going to end up?

"Jose has been brought in to win silverware. If he wins it, then that could be a stepping stone. They're absolutely miles away from that but you have to be optimistic."

Crouch was also concerned about the long-term direction of the club and their ability to retain their best players – most notably captain and top scorer Harry Kane.

"Their season is hanging by a thread," he said. "When I see Harry Kane trudging off, he shouldn't even be playing in this competition.

"That's the worrying thing: Where's his head at – players who deserve to be at a higher level than the Europa League? Games like this certainly don't help.

"It was an honest interview [from Mourinho] and there was no dressing things up. He questioned players' attitudes.

"Players went into that and thought they'd coast it. I don't think they can fix things this season. On the form in the past two games, they're miles off the top four, so where does that leave them?

"It's not a successful season."

Siff: Jose has to be done after this passive & timid display and after Sunday, he cannot do anything with this squad. Let Ledley [King] manage vs Villa and replace Jose over the international break.

Lee: I don't care how much it costs us, Mourinho has to go after tonight. This is beyond a joke.

Angelo Lambo: At this point, I'm honestly happy when we lose just so that there's a higher chance of Mourinho getting the sack.

Andy: How many beeps can I use to describe this god awful performance from Spurs. I hope Levy is happy with his appointment of Mourinho.

Steve, the embarrassed Spurs fan: For all those calling for Jose to go, what about the players who have been feeble in both attitude and application?

Mark Burt: Spurs fans can cane Jose to the cows come home but spinelessness of the players is on them. Managers can provide game plan but they can't teach bottle.